Anger is a Gift: Local Rock Writer Chris Akin Channels his Rage into a Memoir 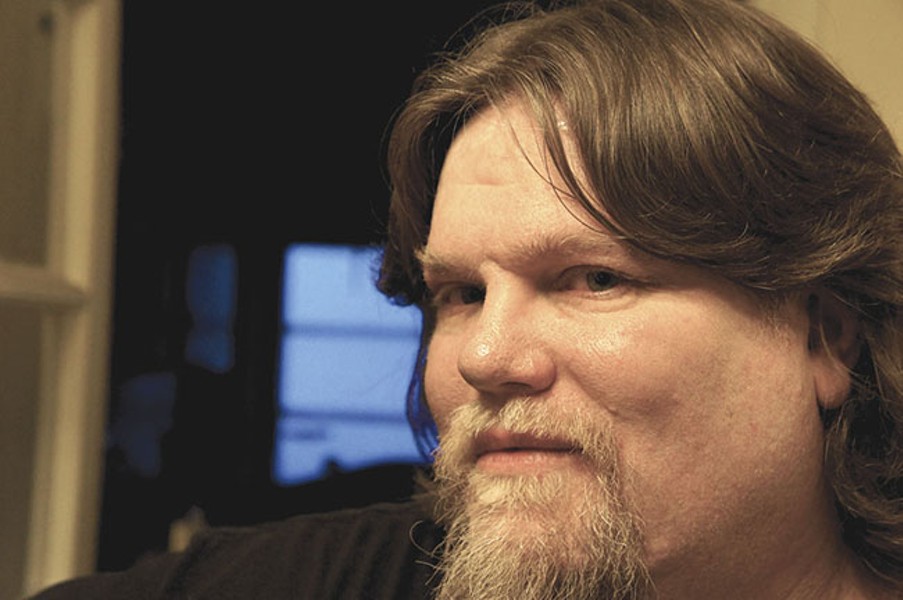 At one time, local rock writer Chris Akin was like the Howard Stern of local media. Akin, who got his start as a stringer at Scene and then formed his own magazine, Music's Bottom Line, also co-hosted The Metal Show, a talk/music show on WMMS that ended in 2002 (but then shifted to 92.3 until 2006). He regularly feuded with bands and other rock critics alike. It's not a surprise, then, that Akin had some issues. He had stopped talking to his parents. He was struggling with obesity. And he was in a bad marriage. A couple years ago, he almost offed himself. He recounts all of this in his new memoir, Little Victories: A Tale of Divorce, Debauchery, and Finding Happiness. A self-published affair, it's currently for sale on Amazon and through chrisakinbooks.com. He recently stopped by our office to discuss the book.

Talk about the decision to write about a book about one year in your life. Why that topic?

Ultimately, I knew in my head that I had tons and tons of anger issues. I was married for 23 years. I was 18 when I got married. Throughout the course of it, I had this anger issue. I was angry all the time. It got more and more deep. I stopped talking to my parents entirely. In a weird way, I got rewarded for it locally with radio and writing. People loved to hear me rant. When my now-ex came in and said she was leaving, I was monumentally alone. I felt like I was isolated from all my friends and the only person I had in my world was gone too. I didn't know what to do. I started writing at some point. I decided that the way to stop being pissed off was to do it in public. I started on Facebook. I wrote these long-winded rants, put my emotions out there and it blossomed. I started exercising and working out. So far, I have lost 140 pounds. I still do the yoga every single morning. By the end, I feel ready for the day. Diamond Dallas Page has a blog and I started writing on there and got a lot of attention. I had been doing all this writing. He wanted me on his show to talk about losing weight and emotional stuff and I said sure. I told him I was thinking about writing a book about losing weight. I sent him four or five chapters and he thought I had something and he forwarded it to a publisher who wanted me to sign a deal. It was supposed to be a weight loss book and turned into so much more of a thing about emotions and reconnecting with friends and family.

What drew you to metal in the first place?

I was a metal head as long as I can remember. I listen to everything. When you see my iPod, it's Kid Rock and Captain and Tennille and Cannibal Corpse and everything in between. My mom used to work for National Center and was [promoter] Jules Belkin's personal banker. As long as I can remember, we had tickets to shows and backstage passes. I was always in that mix. She took me to see Led Zeppelin and Black Sabbath and Twisted Sister.

When did you start writing about it?

In about 1996 or '97, I started writing for Scene. I was in this nasty industrial accident and got burned up pretty bad. The doctors wanted me squeezing a tennis ball. I did that for like 10 minutes. Then, they had me typing. I used to write letters to Scene about how bad this review was or that review was. The music editor called me and asked if I could do better. I said, "Yeah."

You said you know the lyrics to some 80,000 songs. Do you keep adding to that list or have you stopped listening to music?

I use the Amazon cloud. I have a music site called Pitriff.com. It's semi-retired, but I still write every once in a while. It keeps me getting the music. I do add to it. I get the same emails you do — 50 of them a day — from publicists. Now, I just read what they say it compares to. If it's something I like comparatively, then I'll download it.

Describe your relationship with the local metal scene.

Up and down. What always made me, and what made people hate me, is that I say whatever I thought. I still do that. I am maybe a little nicer about it now. I always believe that saying it softer than it is gives people false hope. I don't want people to do that, even with my book now. If they hate it, they should tell me. Because of The Metal Show, people knew what they were walking into. We had moments that were uncomfortable on the show. We had moments where bands were in the studio and I said I didn't like their song when they were sitting right there.

Who was your best interview of all time?

The most fun I ever had was [former Metallica bassist] Jason Newsted. It couldn't have been a month after he left Metallica. We interviewed him and he was talking about [his solo project] Echobrain. We played one song and then it was all Newsted for two hours, and we closed with Echobrain. He talked for two hours about Metallica and how difficult it was to leave. It was fantastic. It was fun. There have been lots of those that have been fun. The big ones are not that much fun. It's more fun when I get these new bands that are excited. I like Volbeat, and the first time I interviewed that guy was before they hit. He was so excited to be on the phone. Little bands like that are much more exciting. Dio was especially cool. I trashed his album Angry Machines. I remember the quote was "seeing Dio now is like watching [NFL star] Lyle Alzado die." About a month or two later, I was asked to interview Dio. I got on the phone and I was like, "Yes, Mr. Dio. No, Mr. Dio." He read my review back to me. He was totally cool. He thought maybe I didn't understand what he was going for. After that, every time he came to town, he always remembered me and invited me to the show.

Worst interview of all time?

There's plenty of those. [Pantera's] Vinnie Paul is particularly bad. He's a stock answer guy. And a yes or no guy.

What are your hopes and aspirations for the book?

I've said it since the beginning: I just wanted to sell one copy for my own shelf. It was one of those bucket list things. I always wanted to write a book and now I have. One of the things that I chose to do is donate 25 percent of the proceeds to a charity called Common Ground. One of the underlying messages of the book is that I had great people around me, and if I was an emotional mess someone would pick up the phone or come to the house. I write a lot about those relationships that I rebuilt. There's a lot of people who aren't that fortunate. They have a 24-7 phone line that you can call anytime. They also have offerings that would be helpful for people like me. They have an online chat thing. They are also building a texting thing. I thought if I could give back to somebody and pay for one person's phone call, that's cool. I was amazingly fortunate to have that kind of a crew of people around me to help me through.