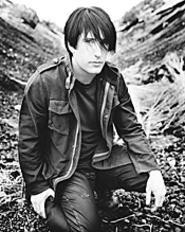 In a recent New York Times article that disputes the age-old link between creativity and depression, author Peter D. Kramer claims that it is "depression -- and not resistance to it or recovery from it -- that diminishes the self." Devoted acolytes of Nine Inch Nails major-domo Trent Reznor would heartily disagree with such a statement -- especially since the 39-year-old has always seemed personally empowered by despair and alienation. He's a black-clad Superman embodying Kramer's assertion that in some circles, "melancholy is heroism."

Certainly Reznor's larger-than-life mythology of bleakness appears to insulate him from any fan backlash. In fact, the six-year gap between 1999's The Fragile and the new With Teeth has only increased interest in his enigmatic world. NIN's current small-venue U.S. tour sold out within minutes -- with tickets now fetching hundreds of dollars on eBay -- and the band is closing this weekend's Coachella Festival with a Sunday-night headlining gig.

Yet there's something to be said for the concept of despair weakening artistic drive. Initially, The Fragile was a musically absorbing two-disc set -- think Brian Eno and Massive Attack being torn limb from limb by rivetheads in steel-toed Doc Martens. But these days, the sprawling album sounds like the very embodiment of depression as a mental prison: unfocused and littered with frustrated and aimless expressions of confusion, anger, and uncertainty.

It's both a relief and a surprise, then, to hear how driven Reznor sounds on With Teeth, despite the usual abundance of self-doubt and regret. While the disc isn't quite as nihilistic or nerve-fraying as 1994's The Downward Spiral, the two albums share an affinity for radio-ready hooks. Reznor snarls like a crazy-eyed maniac, revisits the abrasive industrial sound of 1989's Pretty Hate Machine, and samples twitching electronic outbursts -- all within the parameters of neatly structured songs, not amorphous sound sketches.

Teeth's concessions to tradition are done without compromising any harshness. "Getting Smaller" explodes with a refrain that's practically a note-for-note re-creation of the chorus to the Pixies' "Planet of Sound." The gothic keyboard sine waves on "Only" resemble Ministry's darkwave synthpop origins. "All the Love in the World" even dabbles in industrial's descendant, glitchy IDM electro, and crescendos into a surprisingly dance-floor-friendly throb, complete with falsetto coos and an untz-untz breakdown.

But Teeth makes its greatest strides in the way that Reznor reacts to his ever-present demons -- by questioning their presence instead of feeling trapped by them. This isn't an unprecedented move for him. While Ian Curtis seemed reconciled to impending doom on Joy Division's "Dead Souls," NIN's version of the tune from the Crow soundtrack fought the bony grasp of the underworld, kicking and screaming the entire way. And the entirety of Spiral was the musical equivalent of a padded-room thrash session that commenced after Reznor realized the horrors and atrocities present around him.

Lately, however, he was "too fucked up to care anymore" (on Fragile's "Somewhat Damaged") or lamenting that "it's too late for me" (from that album's title track) to fix his problems. On Teeth, rare is the occasion when he stands by with such idle resignation and "stare[s] into the sun," as on "Sunspots." Instead, Reznor sounds like someone who's just achieved conscious clarity after awaking from a long sleep -- someone suddenly thrust from blindness to sight, reverse-Oedipus style -- and is really pissed off at what he sees.

"What if everything around you/Isn't quite as it seems?/What if all the world you think you know/Is an elaborate dream?" he ponders on Teeth's final track, finding more questions than answers. "Why do you get all the love in the world?" he asks, first plaintively and then with more anger, on another cut.

This last question is telling, as one lyrical theme that emerges on Teeth revolves around broken romance. "I believed I could get better with you," Reznor sings on "Love Is Not Enough." The title track speaks of someone who "Makes you better than anything you've tried/It's in her kiss" -- although "Only" reveals no Hollywood ending: "Yes, I'm alone/Then again, I always was/As far back as I can tell/I think maybe it's because/ Because you were never really real."

That's part of the secret to Reznor's staying power and relevance. Either metaphorically or abstractly, NIN covers the same topics as most pop artists -- love, sex, obsession, and pain. But instead of wrapping his songs in coy phrases or veiled obsessions, Reznor will just come right out and say, "I want to fuck you like an animal" or "I hurt myself today." He's nothing if not blunt.

Confusing the singer with the content of his songs is always a dangerous proposition. But Reznor's admitted lapses into alcohol and substance abuse in the last decade make it easy to connect the dots between lyrical themes and his own life. And there's definite fascination in studying someone drawn to the brink of the bottomless abyss of which he speaks, but who avoids free-falling into nothingness every time. There's always the nagging thought, "Is this the time he actually jumps?" -- and a silent cheer when he returns every time, buoyed by danger.

Reznor's resilience is what ultimately makes Teeth such a success. Both lyrically and musically, the album points to a rebirth of energy and perspective. The subtle difference with NIN now is that Reznor feels as if he has the means to do something about the darkness. He grapples with exorcising his depression and desolation, but isn't paralyzed by hopelessness or anger.

Kramer's article notes that "superficially, mental pain resembles passion, strong emotion that stands in opposition to the corrupt world." Reznor's passion is mental pain -- but With Teeth proves that he's nearly perfected the art of sublimation.