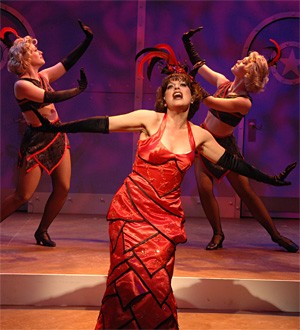 One of the hidden dangers in producing such a tried-and-true show as Anything Goes — a show studded generously with iconic Cole Porter tunes and written in part by acclaimed humorist P.G. Wodehouse — is that the company might slack off and allow the material to sell itself.

Fortunately, this is unlikely to occur in any musical helmed by Terri Kent, the artistic director of Porthouse Theatre and the director of this sensational evening. By paying close attention to the details of staging such a large cast, Kent creates a framework within which the featured actors can shine individually.

The story, of course, takes place on board an ocean liner peopled with the pure (wealthy Hope Harcourt, who is engaged to the slightly daft Brit, Lord Oakleigh) and the profane (C-list criminal Moonface Martin and nightclub chanteuse Reno Sweeney). Love and sweet silliness abound as poor young stowaway Billy Crocker tries to woo Hope while posing as a gangster, and Lord Oakleigh finds himself being lured into Reno's silken clutches.

It's all designed to be nothing more than a light diversion, and Kent understands that — keeping the pace bubbly and the jokes rapid-fire. Also, musical director Nancy Andersen Wolfgang makes sure that the singers enunciate Cole's splendid lyrics with precision, bringing back to life old standards like "I Get a Kick Out of You, "It's De-Lovely," and "You're the Top."

But perhaps the strongest suit in this very full deck is the choreography by MaryAnn Black, who also doubles as Erma, Moonface's moll. Indeed, the title song is the most stirring Act One closer in recent memory, as the entire cast taps and struts in thunderous unison to this anthem celebrating wacky optimism.

Although burdened with the least interesting character, Kaycee Cummings as Hope stays afloat and delivers her songs with professional polish. As her counterpart Billy, Justin Gentry has the looks and the pipes, but he doesn't have as much fun as he could with Billy's love-struck devotion and bad-guy masquerade.

The funnier roles are handled exquisitely. Sandra Emerick brings a saucy simmer to Reno, and Eric van Baars' Lord Oakleigh mangles American slang ("You're the rat's pajamas!") with English panache. As Moonface, Rohn Thomas comically pistol-whips his lines, but he can't get a tremble out of Black's Erma, whose mock-terrified reaction to his status as Public Enemy 13 is priceless.

Done right, a musical comedy can give you a lift like few other productions. This Porthouse production is no exception. It'll lift you so high, you may need to climb down to your car to head home.