Hummus a few bars, and we'll tell you about the area's newest Middle Eastern restaurants. 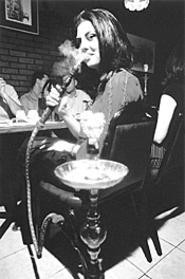 We recently pulled up a chair at two of the newest additions to Cleveland's Middle Eastern dining scene. What we found wasn't quite impressive enough to usher in an era of world peace. But from baba ghanoush to semolina cake, it made for some memorable nights on the town.

TV Dinner
Okay, so it freaked us out a little to find ourselves watching scenes from the war in Iraq, broadcast in Arabic on al-Jazeera, while we waited for the hummus to arrive at our table at Kan Zaman. I mean, we're probably as PC as any Clevelander can hope to be, but still . . . like a Catholic priest who accidentally stumbles into a support group for pederasty survivors, we felt a wee bit out of place.

The "Up Yours" graphic on a staffer's T-shirt didn't help much, either, even though we're pretty sure it was just a freebie from the Uncola. Also, at around 6 p.m. on a Thursday evening, we were the only diners in the place -- and entirely too early to catch the belly dancers or observe the "hubble-bubble" action ($6.99 will buy a session with the tall, ornate Arabic smoking pipe, filled with flavored tobacco). The upshot was that, while service was entirely nonhostile, the vibe at the Ohio City dining room never seemed as comfortable as we might have liked. (When we returned for lunch a few days later, the telly was tuned to what looked like an Arabic soap opera, and the ambiance was considerably more relaxed.)

But what the heck. What brought us to this 10-month-old restaurant had been the promise of Middle Eastern cuisine, that fragrant commingling of grilled meats and vegetables, zesty herbs and spices, and tahini-rich dips. And politics be damned, we were primed to dine.

Kan Zaman's interior reminds us of a long, low picnic pavilion with brick walls, walnut-stained latticework on the ceiling, and three neat rows of highly varnished plywood tables, each topped with paper placemats and napkins. The menu -- traditional Middle Eastern dishes punctuated by such all-American kiddie fare as hot dogs, cheeseburgers, and chicken fingers -- is a big one, both in content and in square inches. But with entrée prices never exceeding the $10 mark (a choice of soup or salad, and rice or fries, included), and only nonalcoholic beverages available, even the most profligate diner would be hard-pressed to go through more than 20 bucks here.

The ubiquitous Middle Eastern version of Grandma's relish tray -- here, pickled turnips, carrots, and celery, with a pleasantly attenuated crunch and what seemed to be an entire day's salt allotment -- appeared almost as soon as we were seated, and we made short work of it while planning our ordering strategy. Hummus and baba ghanoush were de rigueur, of course, the first turning out to be appropriately smooth and creamy, if lacking the contrapuntal punch of lemon and garlic, but the second proving to be a real scene-stealer, with vast, primordial smokiness and the texture of whipped cream. The necessary pita bread -- just right for sweeping through the olive-oil-and-sumac-topped dips -- arrived at the table already cut into wedges, but while it was by no means stale, neither was it entirely fresh.

Fattoush, a salad of chopped lettuce and tomato, sprinkled with sumac and bits of toasted pita, then tossed in a scant amount of tart lemon dressing, was exemplary in its palate-cleansing brightness, while the lentil soup was on the thin side, but full of subtle, earthy flavors. Perhaps the sassiest of the vegetarian dishes, though, were the rice-and-herb-stuffed grape leaves: Lush, tender, and aromatic, they were at their best when dipped into the creamy tahini sauce that was served on the side.

Among the entrées, a combo plate of grilled shish kebab (lamb), shish tawook (chicken), and shish kefta (finely ground beef, mixed with chopped onion and parsley), garnished with juicy wedges of grilled tomato and onion, provided a savory variety of tender meats, although the accompanying rice was dry enough to make us wonder if it might have been left over from the lunch-hour buffet. Finely chopped chicken shawarma, on the same dry rice, also had a sawdusty mouthfeel. And finally, golf-ball-sized orbs of falafel, part of a vegetarian platter, were overcooked and dully flavored.

A favorite Middle Eastern dessert, kunafa (layers of shredded phyllo and mild white cheese, baked until they achieve the delicious duality of crispness and buttery softness, then served warm with sweet syrup), was listed on the menu, but not available; in its place, we opted for a blended-fruit "cocktail," made with fresh strawberries, milk, and honey, and triangles of unremarkable baklava.

Unjust Desserts
On the other hand, kunafa was available at the Sahara, the tidy, cheerful little business that took the place of the Pyramid, on Lorain Avenue, in February. Unfortunately, the kunafa arrived cold, its phyllo layers soggy, and sans the requisite sweet syrup, leaving us to ponder the question of which is the greater disappointment: Not getting what you want, or getting it and finding it subpar?

The upside, though, was that we discovered the Sahara's sweet, dense semolina cake, a chewy, almost candy-like sweetie made with butter, yogurt, and coconut, garnished with an almond, and drizzled with sweet syrup. Together with tumblers of fragrant mint tea, the cake put a lovely final fillip on a meal that also had its ups and downs.

Most of the low points, as it happens, were in the service arena: While Iraqi war footage was nowhere in sight, and our waitress was friendly, talkative, and welcoming, she also seemed perpetually distracted, disappearing to parts unknown for extended periods, and forgetting to fill requests for clean napkins, utensils, and tea unless repeatedly reminded.

Still, the food was mostly worth the hassle. For example, although the Sahara's baba ghanoush was just a pale imitation of Kan Zaman's, and its tabouli seemed to be composed entirely of parsley, without a trace of bulgar wheat, the gently fried falafel was exceptionally delicate and moist. A chicken shawarma sandwich, with rich, aïoli-like garlic sauce, melted in the mouth. A firm but moist basmati rice was unctuously nutty.

The complimentary relish tray held the mandatory pickled turnips, along with spears of mildly spiced cucumber and mellow green olives with a round, grassy flavor; and whole loaves of warm, tender pita bread arrived still in their bag. Skewered and grilled kebabs, tawook, and kefta were reasonably tender, although they lacked the deeply smoky kiss of Kan Zaman's version; but an oval of golden-brown fried kibbeh (ground beef and onions, inside a crunchy bulgar shell) perfumed the air with cinnamon when we broke it apart, and an enormous portion of creamy ful medames (fava beans simmered with lemon juice, garlic, and olive oil) sent up plumes of exotic fragrance.

Now those are the kind of foreign affairs we like to sink our teeth into.