Army of Anyone (The Firm) 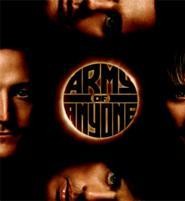 Although Army of Anyone features half of Stone Temple Pilots as well as former Filter lead singer Richard Patrick, the whole isn't greater than the sum of its parts. None of the tracks on the group's debut smolders quite like Filter's mid-'90s breakthrough, "Hey Man, Nice Shot," nor does any match the catchiness of STP's "Interstate Love Song." And nothing here is as breezy as "Take My Picture," the easy-listening smash Patrick had with Filter.

Then again, producer Bob Ezrin, a legend among Pink Floyd and Alice Cooper fans, does create some expansive moments ("This Wasn't Supposed to Happen"). But the disc still fails to match its impressive pedigree, despite the fact that Dean and Robert DeLeo's grungy guitar-bass textures continue to rock. Interestingly enough, the brothers do give their strings a minor industrial tuning for "Father Figure," the closest the disc comes to "Nice Shot." And as Dean rips big-bang solos, Patrick comes full circle on "Goodbye," dropping his semi-Weiland snarl to deliver a soft heeey before crooning, "I wish you were here, I wish you'd stayed here."