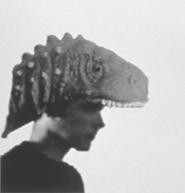 Exhibits about public art generally fall into one of two categories, both of which alienate viewers unnecessarily. First, there are those shows that require you to decipher sketches and plans for works about to be built. Then there are those that seem to say that you can't call yourself a Clevelander (or a Chicagoan, or a New Yorker) without being an expert on the public art in your midst.

The Sculpture Center's first installment of its 2001 exhibition series avoids such miscalculations. This interactive educational exhibit, called Our Cultural Landscape: Conservation Consciousness, should be of interest both to those new to the city's public art and to those who consider such well-known downtown landmarks as the Free Stamp and the Abraham Lincoln sculpture old friends.

Public art has undergone a significant shift since the end of World War II. Scholar and author Sergiusz Michalski argues that, prior to 1945, public monuments were commonly erected to honor individuals or political concepts. The purpose of such works was to educate viewers about the words and deeds of great individuals. They also helped to legitimize the political beliefs of the artists and their patrons. Michalski and others make the point that, after 1945, artists in the United States and Europe have tended to view public art as a means to commemorate events or as a means for satirizing the notion of public art altogether. In other words, the cult of great individuals seems to have fallen by the wayside. Now, cultural forces, not individuals, seem to be of primary concern to public artists. Indeed, this is a shift that we can note in the context of this show. Look at the slides on display of the Lincoln statue, completed in 1932, and contrast them with photographs of pop artist Claes Oldenburg's satirical office stamp, defying traditional definitions of the political monument.

The show consists of booths and slides of Cleveland public art. Artifacts from the creation of some of the sculptures are included, too. The most notable of these is the death mask that was used by artist Max Kalish in the creation of the Lincoln statue. That sculpture depicts Lincoln delivering the Gettysburg Address, which, in turn, has been etched in full on the pedestal he stands on. As for the death mask, it's a rather grisly plaster cast of an all too clearly dead Lincoln. A copy of the original death mask, it was given to Kalish by the Smithsonian while the artist was working on his Cleveland commission. The sculptor's nephew, Don Kalish, a sculptor in his own right, has recounted in interviews how the elder Kalish spared no difficulty to get things right. For example, Max went to Gettysburg to interview the few remaining people who had witnessed the speech in 1863. He also examined every extant photo of Lincoln.

The results of Max Kalish's efforts are striking. Lincoln stands, his arms stretched to his sides, with one palm up. Despite the heroic stance, his deeply lined face and mournful expression demonstrate how the Civil War has taken a personal toll. Kalish in this way combines the hopefulness in the speech Lincoln is delivering ("the new birth of freedom" that the President referred to) with the acknowledgment of the carnage at the battle of Gettysburg. The sculpture is a balancing act between triumph and sorrow, just as the speech was.

The exhibit also includes Cleveland multimedia artist Jon e.w's interactive sculptural piece. The Cleveland Institute of Art graduate introduces us to the "Terrorsaurus." After putting on a reptile suit, gallery visitors can act out this creature's trek through foam replicas of the public sculptures featured elsewhere in the show. A distant cousin of archetypal creatures like Godzilla, he tramples on the sculptures and, according to the artist, symbolizes "the accumulation of all our apathy towards public art." This piece is an engaging artistic restatement of the exhibit's main educational theme: These sculptures are not necessarily permanent fixtures of our urban landscape. Without community involvement in their well-being and without the dedicated effort of professional conservators, they can deteriorate beyond repair.

The before-and-after slides flashed on a gallery wall speak well for the conservation efforts. The center's conservation program coordinator, Juilee Decker, says that, because there is no department of sculpture in the city of Cleveland, the only way to ensure the health of these works is to solicit contributions from private sources and, in general, to "try to get everyone involved." In practical terms, this means that, every year, a sculpture brigade washes and waxes all the works on the center's registry. In fact, much of the preservation work is a form of preventive medicine. For example, the yearly cleanings provide protection against pollution and the elements. Some sculptures need even more help, and professional conservators have been called in. In all cases, the restoration work seems to have been done with infinite respect for the artists' intentions.

Obviously, the public sculptures themselves can't show up for this exhibit, but the photographs and slides help us better understand the real thing. The show is the equivalent of intelligent liner notes to a record album or CD. These are no substitute for the music itself, but they can better prepare one to notice aspects that had previously gone unnoticed. The same goes for this exhibit. It sparks a new appreciation for our public art.