An aborted album cover puts controversial hip-hoppers the Coup on the defensive. 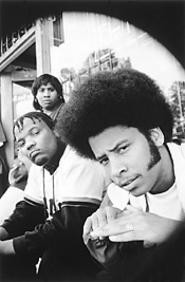 People involved in resistance movements often talk about "sunshine activists": part-time revolutionaries, whose acts of protest extend as far as their personal comfort can be maintained. Sunshine activists don't just check the weather report before grabbing their banner and heading out to the march; they keep an even closer tab on the forecast of the political climate. September 11 ushered in a cold snap of biblical proportions for questioners of the party line, and consequently, virtually no one in the public eye has stepped out of the security of his or her shelter to face it.

One man braving this blizzard of fear and apprehension is Boots (born Raymond Riley), the Afroed emcee of Oakland hip-hop group the Coup. For over a decade, Boots has been at the forefront of radical, rabble-rousing rap music as well as the direct action and political organizing scenes. He's raised eyebrows in even the most liberal of hip-hop circles, and his confrontational communist group the Young Comrades has caused an old-school protest organizer or two to shift uncomfortably in her seat. Boots says it, means it, and most important, backs it up with music as provocative as his message.

"I want people to love the music," Boots says from his Oakland home. "Otherwise I would just be making speeches only. But I want to be part of some music that people take into their hearts, have fun to, and create memories to. I want it to be the soundtrack to their lives. Hopefully, it can be the soundtrack that happens at a time when they get involved and join organizations that are helping to make a change. If not, I want people to like the beat. I think that's the only way I get the music across anyways, if I focus on the music."

But lately, folks are focusing on everything but the music when it comes to the Coup. The band has been at the eye of a funnel cloud of controversy over the original cover photo of its latest album, Party Music, first set for release on September 11. The shot, which was taken on May 15, depicts Coup DJ Pam the Funkstress holding conductor's batons and Boots manipulating a guitar tuner/detonator in front of an exploding World Trade Center. Eerily, the blasts were at the approximate height at which the actual explosions took place. The uncanny coincidence led Britain's Daily Report newspaper -- with no evidence, but understandable suspicion -- to claim that the rap group had direct ties to the terrorists.

In every interview he's done since the bombings, Boots has explained that the Coup absolutely does not advocate terrorism of any kind, that his heart is with the families of the victims, and that a friend of his was on one of the planes that crashed. Now, Boots could have easily made these his only statements on the matter and bowed out of the spotlight with his radical reputation largely intact. But with the attention of the world's media -- an increasingly rare opportunity for a hip-hop act with a message -- Boots has loudly defended the original artwork for Party Music and refused to diminish his words. As he puts it on "Ride the Fence," a track from Party Music recorded months before September 11, "Take a look around and be for or against/But you can't do shit if you ridin' the fence."

Certainly idealistic but never naive, Boots says he is careful to write songs that are inspiring and educational, but delivered in terms that anyone can relate to. A track like "5 Million Ways to Kill a C.E.O.," for all its hyperbole and edginess, is delivered over a bouncy dance instrumental and is obviously meant to be chuckled over: "Tell [him] that boogers be sellin' like crack/He gon' put the little baggies in his nose/And suffocate like that." The very next song is a touching ode to his young daughter called "Wear Clean Drawers," in which he advises, "Life is a challenge and you gotta team up/If you play house pretend that the man clean up."

Since Boots's focus is on the music, his success is measured on visceral and aesthetic levels, rather than with dry political treatises. He often finds his efforts at odds with the so-called "conscious" hip-hop movement that's recently received a disproportionate amount of press, considering its modest sales.

"I think that a lot of the conscious rappers are saying, 'You need to do this, you need to stop doing this,'" he says. "They've been given the wrong information as to what are the big problems going on in the world. Just 'cause I've been privy to some good information, it's made us [make sure to] not be too preachy. That's what saves it from totally eating up the music."

Indeed, it's the unique power that music can exert on people that initially attracted Boots to his calling: He was an activist before he started rapping professionally. In the summer of 1989, Boots and a group he was organizing with were handing out fliers in the Double Rock Projects of San Francisco, the day after police beat a resident named Rossi Hopkins and her twin seven-year-old sons. Her neighbors in the surrounding apartments came out to see what was going on and ended up protecting her from the cops. The crowd overturned eight police cars and sent the officers packing without their guns.

Boots, who wasn't present at the incident, heard the firsthand accounts of those involved the next day. They told him the officers fired shots into the air to intimidate the gathering masses, "and that fear went through everybody; people [were] backing up, and somebody started chanting, 'Fight the power, fight the power, fight the power!' That was right when that song ['Fight the Power' by Public Enemy] came out, and that gave everybody the knowledge that what they was doin' was right. The music gave them that spirit to stand up for what they knew they were supposed to stand up for. That's when I knew that was the place the music had to take the movement. That's when I said, 'I gotta work on my rhymes, I gotta work on my skills,' and I systematically went at getting myself better at rapping so I could do this."

Twelve years, four albums, and one international media hailstorm later, Boots believes more than ever that hip-hop can not only change the world, but that it has to. If his listeners get anything beyond the Coup's rich, distinctly West Coast beats and witty wordplay, he hopes it's something as constructive and universal as "Hey, this shit is fucked up, ain't it? Let's do something!" For Boots, that something is keeping his mouth open, inclement weather notwithstanding.