Art Patronage: The Most Convincing of All Compliments 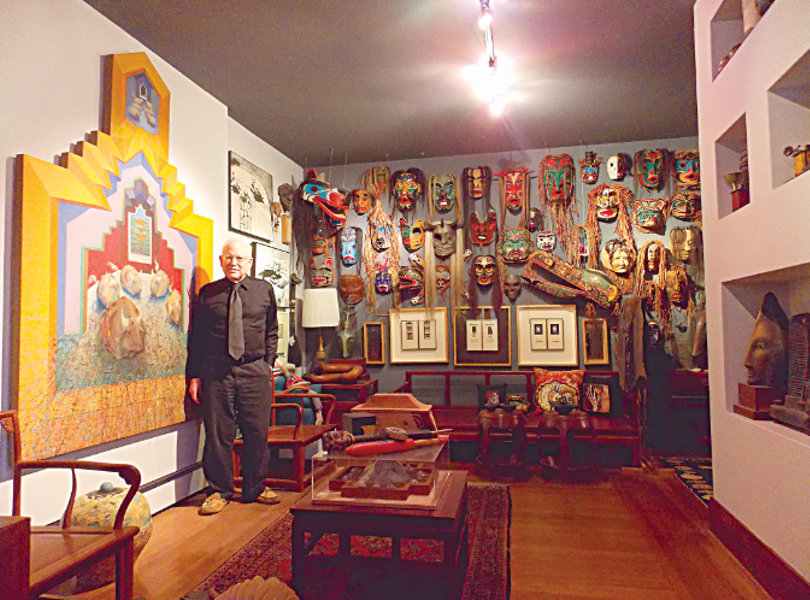 Somewhere in Sandusky sits what appears to be your typical, modest home. Walking or driving by, you wouldn't suspect anything unusual about it. It blends into a row of similar homes on an average road in a residential part of an average town. However, this particular house is unlike any other house in Sandusky. In fact, it may be different than any other home in the world. This is the home of Charles Mayer — one of the region's most passionate and eclectic art collectors — and his private collection numbers in the thousands.

Mayer is the director of the Sandusky Cultural Center, a talented artist and retired school teacher. He has lived in the same house his entire life.

"I've always collected something," explains Mayer. "I think you're either born to be a collector or you're not. As a little kid, I collected key chains, bells — you know, kid stuff, but I really liked collecting. However, as I grew, my tastes grew. I think my first serious collecting started when I got to the Cleveland Institute of Art. Simultaneously, I developed an interest in Japan."

As a student at CIA in the 1960s, Mayer saved up what money he had and began purchasing work by his professors — Ed Mieczkowski, John Clague, Kenneth Bates, Frederick A. Miller, Toshiko Takaezu and more. After his purchase of a stainless steel sculpture, Mayer received a handwritten letter from Clague, thanking him for "paying (him) that most convincing of all compliments" — words that stuck with Mayer his entire life.

At the same time, he began collecting netsuke, small, intricate Japanese belt ornaments. He purchased the first one, in ivory, for $15 from a shop in the basement of the old Arcade. Over the next 10 years, he proceeded to purchase more than 150 netsuke, without ever actually travelling to Japan. His Japanese interests also include origami. Mayer regularly attends origami workshops with the world's best paper-folders and owns work by many of them.

Even Mayer is unsure of the number of works in the collection, but he has over 600 works by Gary Spinosa alone. Nearly every inch of wallspace is covered in art, including the kitchen, stairway and both bathrooms. An entire wall in his living room is filled with authentic masks of indigenous people from around the world, including Indonesia, the Northwest coast, Mexico and more.

Unlike many major institutions, Mayer has been collecting young, emerging local artists for decades. The result is a nearly comprehensive collection of the most accomplished artists in the region. His walls are shared by prominent Cleveland artists William Brouillard, George Mauersberger, Joseph McCullough, Scott Miller, Viktor Schreckengost, Julian Stanczak and Douglas Max Utter; they are joined by younger artists like Dan Corrigan, Rich Cihlar, Matthew Gallagher, Joshua Risner, Omid Tavakoli and many more.

"There was never a moment; it just grew," says Mayer. "The Cleveland artists part of the collection was no more conscious than buying a Japanese ivory or a Disney figurine. I've been said to have a 'collection of collections.' I love stories. I like things with stories connected to them...relics. I have a lot of stories. If you buy something from an artist, there's a personal connection: The fact that you own that reinforces that connection."

Throughout the house are a number of Disney pieces, everything from original artwork and animation cells to rare, international collectibles. He has a collection of Nightmare Before Christmas items, as well as an early print by Tim Burton.

"The only films I saw as a little kid were Disney animated films," says Mayer. "It cost money to go to the movies, and I got a dime a week, so I only went to the movies when it was Disney. That was only about once a year; not even every year. These were like little souvenirs of those movies."

Instead of trips to the movies, at around the age of 8 or 10, Mayer saved up for a series of small, plastic Disney figurines — each ten cents, the same as Mayer's weekly allowance. One by one, he purchased the entire collection, which he still owns and treasures. Over the years, he's collected hundreds of new and antique Disney items from around the world.

The Sandusky Cultural Center opened inside Sandusky High School the year before Mayer returned to Sandusky as a teacher. His high school art teacher was the original director. Over time, Mayer became the assistant director and eventually director. As he became more involved, the SCC became a more serious gallery with professional standards, a regular exhibition schedule and a beautifully renovated space. Earlier this month, SCC opened its exhibition year with a reception for Drawn In, which was themed around the medium of drawing.

Future opening receptions for upcoming exhibitions include Oberlin Connection (Oberlin residents, students, alumni and faculty) on Oct. 19, Off the Grid (artwork incorporating or made using grids) on Jan. 11, 2015, Text on Feb. 22, and Vexing Vegetation (work based on real or imaginary "dangerous" plants) on April 12. All opening receptions are Sundays from 1 to 4 p.m. All events are free and open to the public.

Usmani's work is included in Charles' collection and in the Drawn In exhibition.