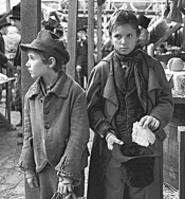 It's almost impossible to watch Roman Polanski's rendition of Oliver Twist without drawing parallels between the deprivations endured by the book's young protagonist and the director's own brutal boyhood. A Jew raised in Nazi-occupied Poland, Polanski first tackled the Holocaust head-on in his 2002 film The Pianist, but Oliver Twist, more than anything else he's made, plays like Polanski's autobiography.

That makes it all the sadder to report that the picture is a disappointingly flat, disjointed affair. Although it hews closely to David Lean's magnificent 1948 version (which similarly condensed the novel's plot), Polanski's film isn't nearly as captivating. Though not without its charms, it proves surprisingly less atmospheric -- and less emotionally involving -- than its predecessor.

Is there anybody who doesn't know Charles Dickens' story of young Oliver Twist, the Victorian-era orphan raised in a workhouse, who runs afoul of authorities when he asks for more gruel? Ultimately, the small but plucky Oliver (played by Barney Clark) runs away to London. There, he falls in with a gang of adolescent pickpockets who work for the sinister Fagin (Ben Kingsley).

He also encounters the benevolent Mr. Brownlow (Edward Hardwicke), who takes him in and treats him with kindness. Happiness proves short-lived, however, as Fagin, worried that Oliver will expose his operation, sends the criminal Bill Sykes (Jamie Foreman) and his girlfriend Nancy (Leanne Rowe) to abduct the boy.

Up to this point, the film is, if not wildly engaging, at least appealing enough to hold your attention. But suddenly the focus shifts away from Oliver and onto Sykes, Nancy, Fagin, and a colleague of Sykes', the carrot-topped fop Toby Crackits (Mark Strong). None has the appeal of Oliver, nor are their exploits particularly interesting or even understandable. Scenes suddenly feel cobbled together, as when Sykes marches Oliver out of Fagin's lair, only to bring him back and then take him away a second time. Oliver, meanwhile, is such a minor presence onscreen for the next 45 minutes that he might as well not be there at all. One of Polanski's great strengths, from Knife in the Water and Chinatown to Rosemary's Baby and The Pianist, is his ability to create atmosphere -- murky, moody, suspenseful, highly disturbing atmosphere. His films are suffused with it, thanks to a combination of his vision and that of his gifted cinematographers and production designers.

But frankly, if Polanski's name were not up on the screen here, few would guess that he even showed up on the set, so lacking is this film in the qualities that have made his other films so memorable. Instead of employing a naturalistic look -- one that refrains from drawing attention to itself -- Polanski seems to be aiming for a slightly larger-than-life effect. As a result, you'll feel as though you're watching a production, rather than living inside it. Those who have seen director Carol Reed's Academy Award-winning version of the story, the 1968 musical Oliver! (or any of the hundreds of stage productions in its wake), have already peered into Oliver's world from a kind of remove. But movies have the great ability to place you seemingly inside the action, so that you live it along with the characters. There's none of that here; this Oliver Twist feels designed and manufactured.