At Home on Stage

At 6 p.m. on Thursday, September 28, Cleveland Public Theatre will host a benefit for Y-Haven Players and CPT's Outreach Program that includes dinner, a silent auction, and a special preview performance of the play. Admission is $50. Call 216-631-2727. 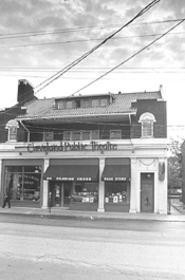 Glenn Vinson has turned his life around since homelessness left him considering the drop from a bridge near East 123rd Street. He and the four other Y-Haven Players -- all formerly homeless men -- are now working to educate the public on the reality of homelessness by performing Reconstruction of a Man, a one-act play to be produced this weekend as a joint effort between Y-Haven Players and Cleveland Public Theatre.

Co-director Khalel Hakim explains that the play was written collaboratively by all five actors, under the guidance of the two co-directors. "The guys wrote it themselves," he says, running his fingers through his dreadlocks. "We sat around with a tape recorder running. They just talked, and we used it."

Kind-eyed Vinson -- who attributes his three-month period of homelessness to drug and alcohol abuse ("I kept my job, but I put my money toward that stuff instead of the rent") -- recalls his story.

"One time, I was in real bad shape at the corner of East 123rd and St. Clair. I hadn't changed clothes in about three weeks. I had it in my mind to head to the hospital, when I must've blacked out. The next thing I remember is hanging over the side of a bridge -- I was going to jump. Then I heard a voice call my name. It was God. I stepped back onto the bridge and looked down the road. You know how phone booths have lights inside? Well, I saw a phone booth, but it had the brightest light I'd ever seen."

For the men, recalling such experiences paid off, allowing them to produce a drama about a homeless man who is accused of murder. As the play begins, protagonist Joe Jackson is the subject of a less-than-constitutional police interrogation; he's under suspicion of killing his work supervisor, a guy nicknamed Big Bossman. A series of flashbacks interrupts the interrogation: Big Bossman fires Joe, Joe's roommate and he get into an argument, Joe has a heated conversation with his former lover. Then things turn supernatural when Joe finds himself in hell, fortunately with an opportunity to save himself from becoming a permanent resident.

"Acting forces the guys to step back to exactly the same situations they've faced in real life," says Hakim, who sees the play as a kind of group therapy. "In rehearsals, they have to act through them according to the script. It kind of teaches them how they might handle things differently."

So the moral is that bad choices send you to hell permanently?

"No," laughs Hakim. "This isn't Shakespeare."