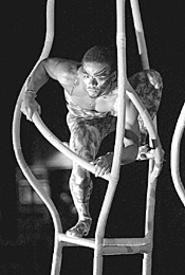 If its mouthful of a name hasn't attracted enough curiosity, its performances may do the trick. Subatomic Frequency Modulation Overdose is a homegrown dance company that, says dancer and managing director Zoe Schultz, "likes to keep it ambiguous."

Nine dancers, three musicians, and an art director combine their talents in six new works under a program titled Imbue. One piece explores "a whole new realm of stilt dancing," promises Schultz, while others veer between feminist issues and underwater life. "There's a thread holding them together, but it's not a concept," says Schultz. "Most of the pieces just have that underlying motive of being saturated with inspiration." Show time is 7:30 p.m. Thursday, 8 p.m. Friday and Saturday, and 3 p.m. Sunday at Cleveland Public Theatre, 6415 Detroit Avenue. Tickets are $10 to $24; call 216-631-2727. -- Zachary Lewis

Canine Lives
Actors dress up like dogs to tell a heroic story.

No actor wants to be upstaged by an animal. That's why you won't find any dogs in Balto. Instead, people dress up in furry costumes. But theatergoers "should forget that they're human actors," says Robert Thomas Noll, who wrote the children's play based on the true story of Balto, a Siberian husky hero. The play tracks the pooch, who led a sled-dog team the final 53 miles through a blizzard to deliver serum to diphtheria-stricken Nome, Alaska, in 1925. Balto's nationwide notoriety led Cleveland school kids to raise money for him to live in luxury at the Cleveland Zoo in his final years. Says Noll: "It's a dramatic story with a happy ending." Balto is at Cleveland Play House's Brooks Theatre (8500 Euclid Avenue) through May 15. Show times are 1 and 3 p.m. Saturday and Sunday. Tickets are $15; call 216-795-7000. -- Cris Glaser

Without the brooding menace and druggy rhythm of the original, Alana Davis's acoustic take on Blue Öyster Cult's "(Don't Fear) the Reaper" really does become the somber, open-armed embrace of the netherworld that BÖC intended. It's one of the highlights of Surrender Dorothy, Davis's third album of soulful folk music. She's split the major leagues and gone the indie route, which gives her plenty of opportunity to explore the rustic R&B that she used to sidestep so delicately. Davis performs at 8 p.m. at the Kent Stage, 175 East Main Street in Kent. Tickets are $12, $10 in advance, available by calling 330-677-5005. -- Michael Gallucci