Four discs trace the development of N.W.A., the original gangstas. 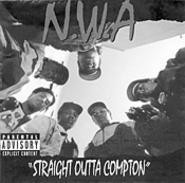 Hip-hop purists disagree about who deserves credit for birthing gangsta rap. Some observers cast their votes for artists like Schoolly D, Slick Rick, and KRS-One of Boogie Down Productions, while others cite early '80s tracks such as Grandmaster Flash and the Furious Five's "The Message," which slammed a socially conscious ghetto narrative into what was then almost universally regarded to be simple party music.

But in the popular sense, the beginning came with the 1988 arrival of Straight Outta Compton by N.W.A., or Niggaz With Attitude. This sonic Molotov cocktail, stirred by South Central Angelenos Ice Cube, Dr. Dre, Eazy-E, M.C. Ren, and DJ Yella, flamed up in the faces of music fans everywhere. The firestorm even engulfed the FBI, which wrote the outfit's label, Priority, a ham-fisted letter grousing about one of the album's most incendiary cuts, "Fuck Tha Police." Talk about an indication that the quintet was on the right track . . .

As it turns out, the N.W.A. inductees didn't stay the course. In the wake of Compton's success, Ice Cube split in favor of an intermittently brilliant solo career and, later, movie stardom. And after one more platter, 1991's Niggaz4Life (known in some quarters as Efil4zaggiN, because it's spelled backward on the cover), the rest of N.W.A. did likewise. But the collective's impact is still being felt a decade-plus after it hit, and four new CDs -- reissues of Compton, Niggaz4Life, and the 1988 Eazy-E solo joint, Eazy-Duz-It, plus a fresh compilation, The N.W.A. Legacy 2 -- provide an opportunity to measure the reverberations from a new perspective. The results show gangsta rap to be an often powerful yet creatively limiting genre that's largely abandoned its political edginess in favor of the lowest common denominator.

"You are now about to witness the strength of street knowledge": These words provide an apt introduction for Compton, which takes the listener on a guided tour of South Central's seamy side. The song that gave the recording its name still carries weight -- thanks to Cube, who's got one of the best deliveries in the genre's history, and Dr. Dre, the member most responsible for its innovative sound. Dre's productions would become denser and more complex in future years; he effectively invented G-funk, which became West Coast rap's aural signature. But the spare, rhythm-heavy approach he used on his first major opus prevents Compton from dating as blatantly as have most hip-hop recordings from the period.

The four extra cuts affixed to the new Compton don't add a lot of value: Remixes of "Straight Outta Compton" and "Express Yourself," one of the album's weaker salvos, are standard issue; "A Bitch Iz a Bitch" can be found on the first N.W.A. effort, 1987's N.W.A. and the Posse; and "Bonus Beats" is pure filler. But the 13 hardcore numbers that precede them haven't wilted a bit over time.

Although the N.W.A. offerings that followed Ice Cube's 1989 departure aren't exactly flaccid, they don't stand nearly as tall. The 1990 EP "100 Miles and Runnin'," most of which can be found at the tail of the reissued Niggaz4Life, leads off with the effectively cinematic title song, on which M.C. Ren rises to the occasion. However, "Just Don't Bite It" is an ultra-lame attempt at comedy that foreshadowed a subsequent uptick in misogyny, "Sa Prize (Part 2)" is more sketch than song, and "Kamurshol" is essentially an advertisement for N.W.A.'s next album, touted via lines such as "Buy that fuckin' album, bitch."

Those bitches who did wound up with a CD that strained in vain to top Compton. "Prelude," the self-conscious opener, makes clear how much N.W.A. missed Ice Cube, who's attacked in "Message to B.A." (short for Benedict Arnold), a collection of allegedly insulting but ultimately dopey answering-machine messages. "Niggaz 4 Life," in which the remaining foursome defend the use of the word "nigga" over a groove snagged from the Parliament/ Funkadelic factory, is considerably more trenchant, and "The Dayz of Wayback" nods smartly to the Jamaican toasting style that served as a major rap precursor. But the body of the disc goes after women as nastily as Cube once attacked the boys in blue. "To Kill a Hooker," "One Less Bitch," "Findum, Fuckum & Flee," and "She Swallowed It" are examples of gangsta rap at its most mindless -- just the thing to thrill future MCs with no interest in donning thinking caps.

This last group includes Eazy-E, the weakest link in N.W.A.'s chain -- and his solo debut hasn't improved over time. Emblematic of Eazy-Duz-It is his version of "Boyz-N-the-Hood," an exceedingly tepid, flat-out embarrassing rendition of the hip-hop benchmark, heard first on N.W.A. and the Posse. Just as unimpressive is "5150 Home 4 Tha Sick," a 1992 EP attached to the end of the Eazy-Duz-It reissue.

The N.W.A. Legacy 2, released three years after its similarly monikered predecessor, is an attempt to cash in on N.W.A.'s continuing cache, and the folks who assembled it were wise to begin with "Hello," a track from 2000's War & Peace, Vol. 2 album that features Cube, Dre, and M.C. Ren. "I started this gangsta shit/And this is the motherfuckin' thanks I get?" Dre spits by way of confirming that the same societal ills N.W.A. railed against or gloried in throughout Compton are still around -- a notably thoughtful theme, albeit one that's touched upon only briefly.

Several other selections have relatively serious moments as well, including "AmeriKKKa's Most Wanted," Cube's 1990 classic, and "Behind the Walls," a prison yarn by Kurupt and Nate Dogg that reached stores in 2000. But most of the other efforts substitute humdrum braggadocio for the radical rebellion that was once at gangsta's core. Snoop Dogg, who wound up in the N.W.A. family tree after guesting on Dr. Dre's influential 1992 headliner The Chronic, is part of five songs on Legacy, and all of them are purely escapist. "Lay Low" concerns humping, "Got Beef" focuses on muscle-flexing, "Wrong Idea" stresses keepin' it real, "Just Dippin'" does likewise, and "B [as in Bitch] Please" sports romantic lyrics such as "Get down on your goddamn knees/For this money, chronic, clothes, and weed/You're fuckin' with some real O.G.s."

In other words, the legacy of N.W.A. is more about getting wasted and getting laid than it is about destroying a racist power structure. That shouldn't be a surprise, since the former is a lot easier to accomplish than the latter. But at its best -- and Straight Outta Compton certainly qualifies -- gangsta rap can rattle the Man even as it provides a seductive soundtrack for excess. And that's definitely worth taking credit for.