When the teen popper played the shopping center, there wasn't much music in store. 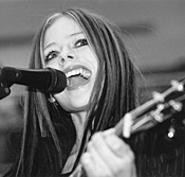 "You're gonna get a black eye, girl," the one tween threatened the next. Though they were dressed like renegade Easter eggs -- all pink and purple pastels -- their dispositions weren't nearly so cheery. They jockeyed for position like a couple of pint-sized power forwards in the center court of Strongsville's Southpark Center Mall, where Avril Lavigne's free "Live and by Surprise" mall tour was set to stop, just 48 hours after being announced. It was a shade past 4:30 last Wednesday, and already a couple thousand kids and their weary parents were craning their necks and standing on tiptoe for their glimpse of the makeshift stage where Lavigne would soon appear.

Until she did, it was a rugby scrum with pigtails. This crowd could've had Captain Kangaroo throwing haymakers inside of 10 minutes. "Everyone take one or two steps back, and find out if anybody got squished," a stagehand pleaded to little effect.

Everyone was pressing for a better glimpse of the three-foot-high platform in the mall's atrium, beneath towering palm trees. Kids lined the balcony above, with police barrier tape keeping them off the railing. Mall security guards barked into walkie-talkies like secret-service agents. At last, they had a more substantial task than patrolling the food court to make sure that no one stuck gum under the Orange Julius tables.

Near the stage, the most minute activity elicited torrential screams. Promoters goaded on the crowd with chants of "Av-ril! Av-ril!" and tossed out AOL plush toys, inciting kids to lunge like drunks diving for foul balls at the World Series.

Amid the 13-year-olds wearing Lavigne's trademark wife-beater and tie, and the kids in Baby Gap gear, parents were the only common denominator: Moms looked even more exasperated than moms normally do; dads, forbidden to hoist their daughters atop their shoulders, did so anyway.

Thirty minutes later -- a full month in teen years -- Lavigne climbed atop the stage inauspiciously. Dressed in a high-cut, pinstriped black shirt and black pants, she sat on a stool with her sunburst acoustic guitar, another guitarist immediately to her left. "How you doing, Cleveland?" she asked, one of the only times she acknowledged the crowd, which drowned out the PA through most of the show.

Lavigne went heavy on new material from her forthcoming May album, Under My Skin, most of which sounded distinctly indebted to fellow Canadian Alanis Morissette -- all plucky breakup songs, sung in a tremulous upper register. She also turned in bored, requisite renditions of her hits "Sk8tr Boi" and "Complicated," which the crowd sang along to breathlessly, doing a better job of it than Lavigne. The 19-year-old, like every enduring teen star, is obviously struggling to express her entrance into adulthood without alienating the tweens who have made her a millionaire. When she sang, "Did you think I was going to give it up to you?" from her latest single, half the crowd clearly didn't know what "it" was.

Only minutes into the show, the youngest kids had already lost interest, turning their attention instead to spit-bubble contests and making paper airplanes out of the free "Avril Rocks" placards. After barely half an hour, Lavigne exited the stage with a polite wave. Most in attendance had stood around for twice as long as she actually performed. "She was supposed to play for an hour," one guard huffed. Parents were equally unimpressed.

"That was the lamest concert I've ever seen," said Jonie, a blonde mom with a vanful of knee-high kids in tow. "The stage should have been higher."

"She could have said 'hi' and 'goodbye' to everybody," Barb, another mom, noted.

The kids seemed to enjoy just being in the midst of such excitement, though every exchange we had with a young'un went something like this:

Did you enjoy the show?

Could you see anything?

Afterward, as Southpark turned back into just another suburban mall, a group of overzealous young passengers in an SUV tailed Lavigne's limo through the parking lot. They hung out the windows, honking and screaming, showing no interest in giving up the chase. "So much for my happy ending," Lavigne had sung just a few minutes earlier. It was one sentiment that all ages could share on this day.