With Gigi. Friday, January 18, at the Cleveland Museum of Art. 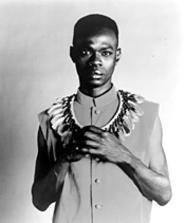 Just before his cell phone cuts out, Baaba Maal says he'll bring a five-piece band to perform here January 18. Then the connection to Senegal, where Maal is a superstar, dies. So tantalizing. So frustrating; somewhat like Missing You, Maal's latest album. The language gap makes the CD hard to understand, but its passion is unmistakable. It spans the gorgeous "Miyaabele," a waltz with a Latin American overlay; "Leydi Ma," a tune about nature that starts like Delta blues, then devolves into something far more filigreed and strange; and "Allah," a chant from the sky church. Missing You was recorded after dark in a Senegal village, and wildlife noises abound, lending it an animistic spirit. Listen long enough to this deep world beat album, and Maal's authority and fervor captivate. Born into the wrong class to become an artist/communicator/Griot, Maal nevertheless pursued his calling, absorbing his country's native musical influences in the company of his old friend, guitarist Mansour Seck, and completing his education in Paris. Missing You is his eighth album. The Cleveland date comes a week into the first month of Maal's first all-acoustic tour of the States. Sure to be exotic, it likely will be astounding.