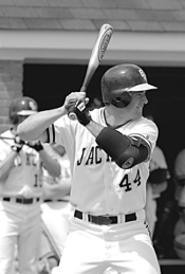 It is a pleasant, even beautiful city, but the friendly confines of Berea don't seem worthy of Cleveland's biggest slugger. He plays for the brown and gold of Baldwin-Wallace, a college that apparently stole its name from a personal injury firm. Only 100 to 150 people show up for his games. They don't even have to pay to get in.

But this season, they watched him lead the Ohio Athletic Conference with 16 homers, a school record. He hit .381, knocked in 50 runs, and was named the All-OAC first baseman -- in a mere 34 games. Expanded over a 162-game season, it's akin to a major leaguer with 75 dingers and 235 RBI. Juan, Manny, Thome -- they only dream of numbers like these.

Still, it would be easy to dismiss such feats. This is college baseball, home to the sacrilege of aluminum bats and softball stats. Though the OAC is a force in Division III, it remains an egghead conference better known for scholastics. "Most pitchers throw in the mid-80s, some in the upper 80s," says B-W Coach Bob Fischer.

Translation: They're more likely to get jobs at the White House than the Jake.

Not that any of this matters to Pat Shannon, long-ball threat extraordinaire. A Connecticut boy, he spurned Division I to come to Berea. He has relatives near Sandusky, spent his summers vacationing there. So he wrote a letter to Fischer, then sent tapes. There are no athletic scholarships in Division III. It's pay-to-play. But Shannon didn't care. "I thought it would be a lot more fun."

Besides, he liked what he saw at Baldwin-Wallace. "A lot of the professors in the business department actually worked out in the real world, and they bring it back to the classroom," he says.

It's an obligatory line for alleged student-athletes, interview code-speak for "I wanted to chase fillies and test the scientific boundaries of blood-alcohol limits." But Shannon's stats back his sincerity. He's earned a 3.4 in business administration. He's made the OAC all-academic team -- a considerable accomplishment in a league with bigger brains than bats.

Baseball, that didn't come as easy. He got only 14 at-bats as a freshman, though he hit .429. He started playing full-time as a sophomore, and his power emerged. But it wasn't till this year that Shannon became the league's preeminent slugger. In one game against Lake Erie College, he hit two homers, drove in eight runs, and scored five.

Bob Fischer has guided the Yellow Jackets for 35 seasons. He speaks with the measured tongue of a man whose capacity for excitement has eroded with age. But even he calls Shannon the complete package.

"A lot of times, you see a power hitter with high numbers in home runs, but maybe a lot of strikeouts and not a high batting average," says Fischer. "That's not true of Pat. He hits the ball to all fields. He has power to all fields. His home runs are oftentimes long, majestic fly balls, but he'll hit as many hard line drives. He's able to hit it 390, 400 feet without really trying."

And, says Fischer, "He's an excellent kid. The kids like him and respect him. He's well thought of."

Both coach and player are a tad defensive about the limited respect granted to the OAC. But Shannon notes that Baldwin-Wallace has beaten Division II teams. OAC colleague Wooster even knocked off Ohio State this year -- in Columbus. In other words, this ain't the Garfield Heights 35-and-over league.

Pro scouts aren't so willing to buy this argument. Asked what he thought of Shannon's major league prospects, one scout responds, "I don't think much of them. He plays in a Division III league. He doesn't see enough guys who throw 93, 94 miles an hour. The breaking ball gives him trouble."

Others are noncommittal. "It looked like the kid had some power, but a little too slow of foot," says Whitey Hafner, a scout for the Seattle Mariners.

Adds Mike Trbovich of the Colorado Rockies: "He's hit well for at least two years. He's big, and he's got some power. You never know, somebody might sign him and give him a chance."

These aren't what one might call ringing endorsements. Even Fischer concedes pro interest is limited. "Not many this year have called us or inquired. I suppose they're waiting to see how he did this year and will follow him next year."

Yet Shannon takes it all in stride. He thinks about going pro, but he does so with the passion of someone deciding whether to go to the movies on Thursday night. If he gets drafted, he'll give it a shot. If not, he won't try to fight his way in as a free agent. He's heard from other minor leaguers who've tried. They say only the drafted players get attention. No matter how well you play, "You're not going to get a chance in hell," says Shannon.

Besides, he has more pressing matters to attend. "I love baseball and all, but my main goal is starting my own business eventually."

The greatest slugger in Cleveland isn't thinking about dainty fields like consulting or risk management. He wants to do "something in manufacturing," maybe baseball bats or wood products. He may be from Connecticut, but he's become a good son of Cleveland.