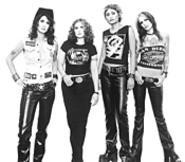 Last year, Betty Blowtorch earned $45,000 on tour -- not a bad take for a then-unsigned all-chick sleaze-rock band with songs like "Shut Up and Fuck." Of course, Betty Blowtorch spent $44,000 to earn that 45K, paying the rent with day jobs between two-week touring stints.

Reminiscing about a decade on the L.A. scene, soft-spoken bassist-vocalist Bianca Butthole doesn't lament the trials of being an estrogen-dominated rocker, but she's very much a realist. She's found the answer to the band's new album title -- Are You Man Enough? -- to be, in most cases, a resounding no. Not from their legion of fans, but from the testosterone-fueled members of the music biz who can't seem to get their minds (or their money) around the idea of four women (including drummer Judy Molish, guitarist-vocalist Sharon Needles, and guitarist Blare N. Bitch) in a revved-up Johnny Thunders-meets-Buckcherry outfit.

"We need a manager," she says. "Really bad. But because we're a hard-rock girl band, nobody wants us. Nobody. I'm hoping and praying this band gets to a level of some success. Of course, I want more, but if we could get to the halfway, some success, then I could tell everyone to fuck off -- all those people who say we'll never make money off an all-girl rock band.

"Betty Blowtorch is probably going to be my last band, so I'm going to get as many good memories as I possibly can before I hang it up," says the woman who brutally, but with much humor, wails her heart out on such songs as "I Wish You'd Die" ("slowly," no less). "If [Blowtorch] doesn't take off after a few years, I told my friends, shoot me if I'm up there [when I'm] 45 years old, trying to do rawk. Somebody tell me to wake the fuck up and get a job and a life. I'm not delusional. I have a backup plan."

As a teen in the early '80s, the L.A. native used to ride her moped to punk shows at the Starwood and the Whisky, but she didn't gather the confidence to start her own band until the early '90s. That band, Butt Trumpet, "was about revenge," she says. "This guy I was [dating] was very negative, so it was such an awesome reward when I was headlining the Masquerade in Atlanta, Georgia -- it was almost sold out, and he was front and center."

Ironically, Butt Trumpet struck a deal with EMI just as the lineup was breaking up, though the band managed to release one album -- Primitive Enema -- before truly imploding. Needles, Bitch, and Butthole regrouped as Betty Blowtorch in 1998 and recorded an EP, with ex-Guns N' Roses nice guy Duff McKagan producing. McKagan is but one of the band's many musician supporters, though again, Butthole notes, "doors really aren't open for women in rock -- still. Pop, no problem. It blows my mind. It's sick. Thank God for Kittie, at least. While they're not my cup of tea musically, at least they're hard and heavy."

Speaking of hard, Vanilla Ice guest-raps on Are You Man Enough?'s "Size Queen," another of Betty Blowtorch's honest and loving odes to sex and drugs and rock and roll -- and of course, penis size.

"I can't get a date in this town, because I get up there and sing about size. Why do I write songs like this? -- I'm totally cock-blocking myself!

"People don't even know what a marshmallow I am," she says. "I come home and bake cookies, sit in my bubble bath. I'm just a dork."

On Are You Man Enough?, the entire band shines, musically, vocally, and lyrically, with funny, sweet songs like "Dresses" (about the band members' distaste for them) fitting nicely next to "Part-Time Hooker."

"It was such a pleasure working with Matt Hyde," says Butthole. "This is the first record where we had more than $700 and we found out what preproduction was. Matt is a real stickler with timing. We played to track every day for like nine hours. He was our drill sergeant. But it was really good for us -- and he got us, our humor. All our songs are real, all true. They're sincere and real-life, with humor. Even if it's the tragic, broken-heart song like 'Love/Hate,' there's still that humor. We just can't help it. I would love to be the female David Lee Roth."

Record done, it's business as usual for Betty Blowtorch, with day jobs ranging from work at a Melrose clothing store (Butthole) to a position as vice president of the Hollywood-based duplication house Lightning Dubbs (Molish).

And though Butthole has fielded other offers ("I was asked to audition for Hole. Their label called me like five times last year, but I was like 'Nah. I know too much. I'm not goin' there!'"), she's happily cast her lot with her Blowtorch sisters. While the foursome would love to jump on the coattails of like-minded lineups, including Monster Magnet or Buckcherry, those bands are trying to grab onto bigger coattails themselves. So Betty Blowtorch's most recent gambit was to try to hit the road with another down 'n' dirty buzz band populated by fearless femmes fatales.

"We sent Nashville Pussy a blonde strip-o-gram, because we wanted to tour with them in Europe," explains Butthole. "We haven't heard back yet. I think we'll just be sending out a lot of strip-o-grams this year," she concludes with a resigned grin. "At least until we get a manager!"