The O'Jays' William Powell never enjoyed his success. His family hasn't either. 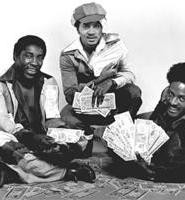 When Jean Powell-Armstrong got the call from Philadelphia International Records, she thought it was a prank.

The caller insisted that Jean's late brother, William Powell, an original member of the O'Jays, was owed a fat chunk of change by the record label, which had released the group's biggest hits, including "Back Stabbers" and "Love Train." Since 70-year-old Jean and her sister, Movita, were Powell's only living heirs, they were entitled to the money.

It had been nearly 30 years since she'd heard anything about her brother's estate. So Jean simply dismissed the call as if it were a winning sweepstakes envelope from Ed McMahon.

"My mom couldn't believe it," says her son, William. "Twenty-some years later and someone was calling her about this? She told them to send [the message] to her in black-and-white."

PIR's attorney, Philip Asbury, did just that, assuring Jean and Movita that "substantial sums are payable to your brother's estate."

The elderly sisters still couldn't believe their sudden fortune. "We were shocked, very shocked," says 68-year-old Movita. "We thought it was a blessing from God."

After all, not even Powell got to reap the fruits of his labor. He died of colon cancer in 1977, when he was just 35 and at the peak of the O'Jays' success. But his sisters would soon realize that PIR had no intention of allowing them to enjoy Powell's earnings either.

"We asked them, 'Why aren't you paying it?'" says family attorney Andrew Goldwasser. "We can't get a straight answer."

PIR would have been nothing without the O'Jays. The songwriting team of Kenny Gamble and Leon Huff started the label with the express purpose of putting out O'Jays albums. In turn, the O'Jays helped refine the duo's signature Philly sound by adding a touch of funk to the smooth string arrangements and lush melodies. Their songs became the anthems of '70s soul.

When Powell died, he entrusted his estate to his mother, Lenora Goins. She soon found herself in court with PIR, fighting for his royalties. A settlement gave Goins a $68,000 advance, with the promise of an escrow account for future earnings.

Two years later, Goins died and the estate was closed. The family never saw another dime. "PIR will tell you that the reason why they didn't pay for all those years is because they lost track of who to pay," Goldwasser says. "Our position was, all they had to do was write a letter to the probate court."

In the meantime, Jean worked as a housecleaner while raising three kids. "My mom, she never had a lot," says Armstrong. She was diagnosed with a brain tumor in the '80s and later suffered a stroke, the result of a botched operation. She has survived on disability checks ever since.

Times have been equally hard on Movita, whose daughter was recently diagnosed with cancer. "The family could really use the money to cover such expenses," Goldwasser says.

But the sisters never heard a peep from PIR, which had quietly held Powell's earnings since 1981, when Goins' advance was finally paid up.

Then, in December 2004, nearly 28 years after her brother's death, Jean received Asbury's letter. "It was more emotional than anything," says Armstrong. "We really haven't ever gotten over my uncle's death. That letter brought back a lot of emotions."

Goldwasser contacted PIR. "They were very nice," he says. "Phil Asbury was a true professional, but he didn't provide us with the info we asked for."

Not only did Asbury refuse to release the funds; he wouldn't even say how much the sisters were owed.

The lawyer also discovered that PIR never started Powell's promised escrow account until June 2004. "It should be noted it was set up in the midst of the federal lawsuit with the other two [O'Jays] members, when they asked where Powell's money was," Goldwasser says.

Even then, PIR only deposited small sums into the account, according to bank statements. When Goldwasser filed the suit, PIR closed the account entirely.

"It puzzled me," Armstrong says. "Why would you write a letter, especially to my mom, that this money is there and then refuse to turn it over to the estate?"

Asbury was equally vague when contacted by Scene. "It's kind of weird, isn't it?" he said, but refused to answer further questions.

Goldwasser asserts that the label is using the funds to leverage settlement -- one that could force the family to sign away Powell's future royalties. "[PIR's] only explanation is that they won't pay until they have a full settlement agreement," Goldwasser says. "And we're saying, 'Why do you need a settlement agreement for money you already admit owing?'"

Armstrong insists that his mother and aunt don't care one way or the other whether they get the money. "My mom says, 'Don't worry, I've been living like this all my life. I can keep on living it the same way,'" Armstrong says.

Still, Armstrong says, his uncle gave his life to the music industry.

"And not getting back what he is rightfully entitled to -- it's wrong," says Goldwasser.