Back With a Bang

The Eels return with hard rock and happy death songs. 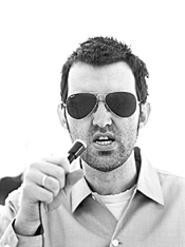 A dark day in history sends out aftershocks. Horror, anger, sadness, and acceptance ripple around events in an ever-widening arc, like the rings inside an oak tree marking time. And at the outermost circle, far removed from the epicenter, is art. TV movies excepted, art generally requires gestation and reflection.

Take the Columbine shootings, which have suddenly emerged as a hot topic for the culturati. Obviously, Bowling for Columbine blazed the trail. Gus Van Sant's Elephant, a fictionalized take on a Columbine-like high school massacre, swept the top prizes at Cannes; smaller film festivals have been lauding the similarly themed indie Zero Day. And last month saw the release of the new Eels album Shootenanny!, a term coined by frontman (and, generally speaking, band-unto-himself) Mark Oliver Everett, a.k.a. E, to describe a festival of carnage.

Given that E is still probably best known for his 1998 album Electro-Shock Blues, a collection of "catchy songs about cancer and death," it might be fair to assume that Shootenanny! is, similarly, a concept meditation on the pervasiveness of violence in American culture.

But you'd be wrong.

"Nope, it's just a bunch of songs," E notes dryly, speaking by phone prior to heading out on the U.K. leg of his tour in support of the record, his fifth. "All of the songs were written in about a week. I kind of just riffed about whatever was on my mind at the moment. Like 'Fashion Awards' -- I wrote that one while I was watching TV. Like literally while I was watching the VH1 Fashion Awards."

Okay, forget all that stuff about art requiring gestation, etc. Sure, some artists are time-mongers -- look at My Bloody Valentine, which has been, ahem, "working" on the Loveless follow-up for a dozen years. Then there are other people, such as E, with the artistic metabolism of hummingbirds. The statistics don't lie: If E keeps working at the pace of Shootenannny!, in a dozen years he'll have written enough songs for 624 albums.

"Oh God -- I don't always work that way," he says. "There's a lot of stuff I've been working on for years, and actually, the song 'Agony' on Shootenanny! was going to be on three different albums. I wrote it at the same time I was working on the stuff that ended up on Daisies of the Galaxy.

"This time around, though," he continues, "I wanted to make songs that were very succinct, very direct -- like the opposite of a rock opera. Even though, if you call it a rock opera, you automatically get an extra star on your review. Anyway, in order to make not-a-rock-opera, I decided to write fast. And loud."

True enough, Shootenanny! follows last year's Souljacker in a more straight-up rock direction than the folk pop E's probably best known for. Yet, the punctilious arrangements that have marked his music since the release of the Eels' 1996 debut Beautiful Freak continue to undergird his style -- and even more so, he notes, on the other, as-yet-unreleased material he's been working on.

"I guess I don't see myself as moving in a particular 'rock' direction," he explains. "That just happens to be the stuff I've released in the last couple years. I work on a lot of material simultaneously, actually. And I have a lot of stuff that's a little more, er, eclectic."

"I hate using that word, though -- it's one of those terms that gets used about me a lot. It's not like I set out to be quirky or something; I just like to mix things up. I have a whole basement at my house in L.A. set up with a bunch of different instruments, and sometimes, when I'm tempted to start writing a song on the guitar, I decide to sit down at, I don't know, the organ or the autoharp instead. I think it's better to keep changing how you write -- if you constantly use the same instrument, it's tempting to keep putting your fingers on the same chords, you know?"

E then laughs -- as he frequently does, punctuating his rambling, stream-of-consciousness conversational style. This shouldn't be that big a deal, except that the other term thrown around a lot when it comes to the Eels is "sad." Critics taking on the dark subject matter of Electro-Shock Blues all but diagnosed E with clinical depression in their reviews -- and the branding has stuck.

"I always thought of that as a very uplifting record," he notes, a hint of exasperation creeping into his otherwise jovial tone. "At least it was uplifting for me; the songs were a way of burrowing out of the grief I was feeling at the time -- not burrowing further into it! I never really understood why people interpreted it as depressing -- and for some reason, that's like become my persona. I'm the sad guy. Well, it gets pretty boring being the sad guy all the time."

If Shootenanny! isn't entirely lighthearted -- certainly, the stripped-down "Love of the Loveless" qualifies as a serious tune, something like the Sermon on the Mount, with a shuffling beat -- it is an album rich with pitch-black humor. That title, for one example. Or, for another, the track "Restraining Order Blues."

"Man, that song was just waiting to be written," E jumps in. "I don't remember why the idea came to me. I just wrote the title down on a napkin someplace -- I'm always writing stuff down on napkins -- and I thought, I can't believe no one's ever done a song about that situation. I mean, it's a good blues kind of setup, you know?

"And it's not autobiographical," he continues, chuckling. "I'm pleased to say. But I like the kind of writing where you find the humanity in your villains. I think it's a much more interesting place to find humanity than in heroes -- much more challenging than, say, writing a song about Mother Teresa."

As E goes on, you can almost hear the grin that must be spreading across his face.

"Actually, I tried that once," the sad guy adds, timing the punch line for maximum impact, "and it turned into 'Father Teresa.' But that's a whole other story."