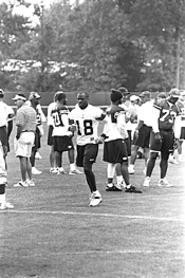 'Tis football season, the high holy days for fantasy geeks, bookies, and the I-Gave-My-Wife-an-Orpheus-
Roye-Jersey-for-Mother's-Day type of fans, who flock to the sports bars to be at one with their religion. But devotees beware: There are obstacles to this sacred pursuit.

Far too many false temples advertise themselves as sporting establishments, yet offer televised fare no better than your living-room tube. The true sports bar, so says scripture, shows every NFL game. Anything less, and a disciple cannot practice all facets of his or her religion -- such as monitoring the over-under on the Bengals-Falcons game. Nor can it meet the needs of guys like Chad Hanobik.

On opening Sunday, he's at BW3 in Rocky River, bedecked in a Colts hat and Marshall Faulk's Rams jersey. "I went to school with him at San Diego State," he says of the star halfback. As the story unfolds, it turns out that Hanobik attended SDSU for but one day and never actually knew Faulk. No matter. The true apostle realizes that even the most tenuous link is excuse enough for some serious bar time.

Hanobik has arrived early to stake a command post near the three big screens. His company will change with each shift: There's the Browns at 1 p.m., the Rams at 4, Miami at 8:30. "We're here every week," he says. "We're usually here about nine hours. I go home and take a nap after the second game, so I can come back for the 8 o'clock game."

On this day, he's boldly bet the over -- 33 -- on Chicago-Baltimore. The final score is 17-6; bet lost. Yet Hanobik, a large, affable man, has bigger worries. "I can't do it next week, 'cause I'm going to propose to my girlfriend. But I'm gonna try to do it Saturday, so I can get back in time for opening kickoff."

Give BW3 (four locations) an A for effort in attracting theologians of Hanobik's caliber. But this being Rocky River, it's a decidedly un-Browns-like crowd. There's only one mullet in the house, no sight of bookies working cell phones and betting sheets, and the satellite can handle only 7 of 10 games. (One noble fan -- read: this reviewer -- had his Vikes game switched to Buffalo-New Orleans for some late-arriving Bills fans, an unpardonable betrayal of sports-bar scripture.)

For the purer of heart, Harpo's on Brookpark Road is strategically located near factories and strip joints for maximum football ambiance. It's not much to look at, but there are plenty of TVs, the waitresses keep glasses full and ashtrays empty, and lunch and a solid drunk comes in at under 20 bucks. Loud cussing of Phil Dawson is also permitted.

Bar officials recommend arriving at least a half-hour before kickoff. Seats for this Sunday Mass, unlike those at conventional churches, fill up early.