At the gates, a gripping showdown is bungled by a love triangle. 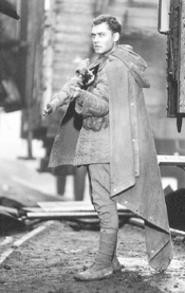 To keep it simple, Enemy at the Gates plays like a cross between the PlayStation game Medal of Honor, a World War II Nazi shoot-'em-up viewed through a sniper's scope, and a Harlequin romance novel. It's history lesson as video game, video game as soap opera, soap opera as highbrow drama, highbrow drama as softcore romance -- so much of everything, so little of anything to grab hold of. No doubt director and co-writer Jean-Jacques Annaud thought he was making a serious film -- it's his turn to save Private Ryan, even if he's dressed in Red Army garb -- but what he ended up with is cornball and sanctimonious, an anti-Communist diatribe dolled up like war porn, filled with loving shots of bodies being obliterated, reduced to sinew and bone. The opening scenes, of Russian soldiers crossing the Volga River in boats that sit like beckoning targets for German bombers, feel like an homage to Steven Spielberg's 1998 war film, perhaps the best ever made. Actually, they play like a rip-off; in the end, they serve only to remind you of what the film isn't -- namely, Saving Private Ryan.

Annaud's epic, complete with scene after scene of horrific massacres and pulverizing strafings, plays like one of those hackneyed, heartwarming WWII movies made in the mid-1950s; perhaps Annaud is worried about being called to testify before Joe McCarthy. "There will always be something to envy, even in a Communist system," says one comrade to another before he sacrifices himself for the cause. And so the audience is able to skip out of the theater guilt-free after two hours and nine minutes of rooting for Commies who kill their own as easily as they gun down one of Adolf's boys. To polish the point, Bob Hoskins shows up as a Naked Gun Nikita Khrushchev -- a vodka-guzzling, ball-busting mobster who keeps referring to Stalin as "de boss." Or maybe he's just talking about Springsteen.

Ostensibly, Enemy at the Gates is a giant folktale writ large and bloody: It aspires to tell the real-life tale of Vassili Zaitsev (played here by Jude Law), a Russian sniper whose acumen with a rifle made him a folk hero in the Soviet Union during the darkest days of the war -- the winter of 1942-'43, when the Nazis found themselves mired in the Battle of Stalingrad. Vassili, a shepherd trained in the way of the gun by his grandfather, was said to have the patience of a stone; he could wait out his prey for days. Celebrated in the papers and over radio as the Soviets' sole beacon of hope to emerge from the city's rubble, Vassili was deemed such a threat by the Nazis -- he wiped out so many officers, the Nazis would promote ill-prepared sergeants by the dozens, just to fill the ranks -- the Germans brought in their best man, the aristocratic Major Konig (portrayed by Ed Harris), to eradicate him. (Konig exists only in Russian lore; the Germans claim no such soldier ever existed.)

That Annaud -- working with screenwriter Alain Godard, who brought William Craig's book Enemy at the Gates to the director's attention in 1995 -- chose to recount what is essentially a war myth is of little surprise. It's the ultimate showdown taking place in the middle of so much rubble and chaos and blood -- two men, one poor and one rich, facing off like cowboys at high noon. "It's the essence of class struggle," says Soviet political officer Danilov (Joseph Fiennes), the man who "discovered" Vassili -- he watched the farm boy mow down a handful of Nazis with a bolt-action rifle -- and, using his typewriter and printing press, elevated him from farm boy to icon within a matter of days. (Danilov even insists Vassili respond to fan mail; he's the war's first rock star.) War stories are hardly so intimate, so one-on-one; hard to believe Paramount didn't choose for its advertising tagline "World War II -- this time, it's personal!"

The scenes between Harris and Law are indeed captivating, even wrenching -- hide-and-seek played by men using artillery. Even as German airplanes reduce Stalingrad to a heap of rubble -- it's less a city by this point than a symbol of the Soviet Union, one worth preserving, even if it means sacrificing the entire Red Army -- the two men wait and wait and wait for each other, staring through sniperscopes with unblinking eyes. They become as immobile, as lifeless as the half-destroyed statues of Stalin that fill almost every inch of the screen. Harris in particular wears the thousand-yard stare as though he's spent his entire life watching the world through crosshairs. His face is frozen in a grotesque mask of ruthless calm befitting his class and status; he smokes gold-tipped cigarettes, never raises his voice, never flinches or sweats. He's the definition of killer elite, and somehow, Harris still makes him the most real character here; he, at least, has a purpose.

Vassili is meant to be seen as his equal -- and his opposite. He doesn't enjoy killing the way Konig does; he talks of noticing whether his victim shaved that morning or wears a wedding band. For him, being a sniper makes war more intimate; the dead are not merely a uniform, but a face that haunts him till it's replaced by another, then another. At first, Vassili revels in his fame, but it soon becomes wearying: He is tired of being an icon, he tells Danilov, as he begs to be removed from the sniper squad and placed back in with the regular army. But by then it's too late: Khrushchev has decided that Danilov and Vassili's fates are inextricably intertwined. If Vassili fails to take out Konig, Khrushchev will eliminate Vassili and Danilov. (The film revels in the Soviets' ruthlessness, even toward their own people; officers gun down soldiers they deem to be deserters. "No mercy for cowards," they shout over machine-gun fire. In Enemy at the Gates, we're left with almost no one to root for.)

But Annaud and Godard aren't content with merely recounting the face-off between two warriors; they insist on recounting the entire myth, which comes complete with a love triangle between Danilov, Vassili, and a Russian soldier named Tania (Rachel Weisz). Danilov wants to use Tania, who can read German, as a translator of intercepted communiqu´s, but she insists on being assigned to the front; as a Jew whose parents were murdered by the Nazis, she seeks revenge with a rifle, not a pen. Danilov wants Vassili to talk her out of fighting, but it's a moot point: Vassili and Tania are comrades-in-arms, literally (they make love amid sleeping soldiers in one touching, almost erotic scene that's less about showing and more about feeling). Danilov, upon discovering their relationship, goes nearly mad, threatening to "reveal" his heroic sniper as a traitorous coward.

The love story, not to mention plot holes large enough to swallow entire platoons, so bogs down the movie that whatever tension the Vassili-Konig confrontation creates disappears every time Weisz appears on screen; she tears apart comrades -- and the movie. By the end, we care little whether this is a true story or not, because Annaud has rendered his tale so mushy and -- worse -- predictable that we feel more manipulated than moved. It's as though Annaud had so little faith in his main story that he felt the need to turn a subplot into his entire plot -- World War II as the world's worst first date.