The CSU women's team implodes over a few beers. 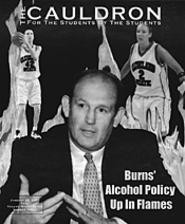 The Cleveland State women's basketball team was once as chummy as a slumber party. They broke even last year with a 14-14 record, and if few players were bound for WNBA glory, at least they had fun. This year's media guide shows a team that knew how to laugh: Next to their stats, players answered such pressing questions as "If you could be any shoe, what would you be and why?" and "What is your favorite outfit?"

Now, the relationships between some players and coaches are as collegial as a custody battle. Two senior co-captains have resigned, and they're no longer speaking to friends on the team. And a former player's mother and a student journalist say the coach threatened to sue them.

The trouble began January 7 with what in retrospect seems like a thickheaded decision. After a 29-point drubbing by Wright State, captains Kim Brockway, 21, and Tonya Crum, 22, retired to the locker room and knocked back a few Bud Lights. Brockway says she felt so at home, she didn't realize she was doing anything wrong. "Our drinking policy, at least on our team, was so laid-back." She says the Vikings openly drank on road trips, and no one seemed to care.

Later that night, Head Coach Duffy Burns, a former bartender, emptied the trash bag and recognized the telltale "clink" of empty beer bottles. Burns accused the two players of violating the athletic department's conduct code -- which bans alcohol use -- and his rule against doing anything to embarrass school or team. The women were suspended. Burns set several conditions for their reinstatement, but by then, the bridges were burned. Brockway says she and Crum resigned after teammates failed to support their claim that the team's alcohol policy was lax.

The incident likely would have died with little fanfare, given the city's general disinterest in CSU sports -- until The Cauldron took notice. On January 28, the university's student newspaper ran a cover photo of Burns with digitally added flames. Inside, the paper delighted in roasting the coach over tales of players drinking at a luau during a team trip to Hawaii. A quote from Brockway's mother, Betty Minnella, proved the most incendiary. "I know for a fact that Duffy has actually bought drinks for members of the team," she was quoted as saying.

The coach vociferously denied the allegations, saying he has never purchased alcohol for his players, nor have any of his assistants. But Patrick Salem, the 35-year-old student reporter covering the story, didn't back down. He wrote a follow-up article saying he saw "several photos of what appear to be parties where alcohol was being consumed by players, coaches and [athletic] department staff." The Cauldron planned to run them soon.

When the next issue came out, however, the photos were nowhere to be found. Editor Mike Conley says a lawyer advised him that the students pictured in the photos could sue for invasion of privacy. Coach Burns also hinted that he might pursue legal action. Salem tried to laugh it off, saying, "They can take my '92 Ford Ranger, if they want to replace the clutch." But he couldn't hide his nervousness.

"We pretty much killed the story," Conley says.

Betty Minnella also felt pressure. She received a cease-and-desist letter from Burns's lawyer and now refuses to elaborate on her accusation, saying she can't afford to hire an attorney to defend herself. She will say only that her daughter "was brave enough to tell the truth, and she suffered the consequences."

Brockway, however, is still speaking out, in large part because of the letter Burns's lawyer sent to her mom. "I'm not going to sit back and let him do anything to my mom," she says. The quote published in The Cauldron, she says, refers to an incident several months ago, when she and three friends happened to show up at the same bar as Burns. She offered to leave, but he urged her to stay and brought a pitcher of beer to her table. She says the bartender, assistant coach Leanna Hicks, later pulled her aside and said, "Duff bought that pitcher of beer for you, but don't say anything."

Hicks denies saying anything of the sort. She and Coach Burns say it was someone else in the crowded bar who purchased the beer, though neither remembers who, and Burns merely carried the pitcher over as a favor to Hicks, who was busy. "There's a difference between delivering a pitcher of beer and buying," Burns says.

The dispute is far from academic. As Athletic Director John Konstantinos and Burns well know, even something as trifling as a free pitcher of beer could be perceived as a violation of the NCAA's byzantine rules against gift-giving. It would also violate the athletic department's alcohol policy.

Konstantinos says he's seen no proof that Burns ever bought alcohol for players. He says his department also conducted a "thorough investigation" and found "no way to corroborate" the allegation that drinking is common among the players. But that's hardly surprising, given his mountainous standard of proof. "Even if you showed me pictures of an athlete holding a beer bottle, I'd be concerned about proving that it contained beer, and if it did, does a photo prove that the person holding it was actually drinking?" he told The Cauldron. Nevertheless, the department is revising its alcohol policy to clear up any confusion.

Those outside the insular world of academia may wonder why the department would go through so much trouble. After all, Brockway and Crum were both of age when they were caught drinking, and a simple admonishment of "Hey, no beer in the locker room" might have sufficed. But if the incident has been blown out of proportion, Burns says, it's only because the suspended players wouldn't let it die. He offered them the chance to rejoin the team, but instead they complained to the student newspaper. Burns says they're bitter about getting caught and have a personal vendetta. "They're trying to bring down the whole athletic department!" he says.

Perhaps the only thing to emerge unscathed has been the basketball team's record. On the day The Cauldron ran its story, the Vikings began a four-game win streak.