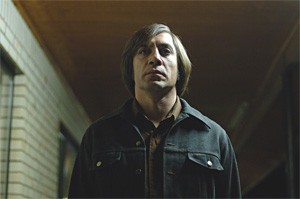 It was only a couple of years ago that the horror genre seemed newly resurgent, like an undead killer digging himself out of the grave. "Fresh-faced" directors like Eli Roth, Rob Zombie, Darren Lynn Bousman, and James Wan — "The Splat Pack," they were dubbed — seemed poised to take terror to the masses in a big way.

They succeeded — briefly. But even as some of the movies continued to innovate this year — the campy retro-double feature of Grindhouse, the smart satire of Behind the Mask: The Rise of Leslie Vernon, the oddball survival horror of The Mist — box-office receipts plunged.

Not that scary is dead. As studios scrambled to salvage their horror lineup and adjust expectations, a different sort of terror emerged onscreen. "The scariest stuff in terms of new films was encapsulated in Javier Bardem's performance in No Country for Old Men," says Lucky McKee, writer-director of the cult hit May and one of Showtime's Masters of Horror episodes. Indeed, you won't see the Coen brothers' movie advertised as horror, but what else should you call a film about a black-clad, borderline-supernatural assassin who wanders Texas, blowing holes in people's heads with a compressed-air gun?

The Los Angeles Film Critics Association recently bestowed their Best Picture award upon There Will Be Blood. As horror fans know, that title comes straight from the lips of Tobin Bell in Saw II. And even Atonement, the year's big English-accented costume drama, features a scene in which an injured soldier's head is unbandaged to reveal a massive, gaping wound, off of which a big chunk of broken skull promptly falls. A similar scene in Saw III had audience members fainting just last year. Moviegoers, it seems, are still hungry for gore. They're just not flocking to the films that traffic in it primarily.

Eli Roth, whose Hostel Part II was, at least compared to the first Hostel, a disappointment, thinks the scheduling of this year's horror flicks didn't help. "Why are we coming out in the summer?" he asks. "It was June, and people were in the mood for Oceans 13 and Pirates of the Caribbean; they were just in the mood for summer blockbusters."

Courtney Solomon, president of After Dark films, got stuck with a July release date for Captivity, which fared dismally after the Motion Picture Association of America forcibly recalled its controversial billboards and posters. "The movie was originally scheduled for May 18, which would have been the first horror movie out that summer, going head-to-head with Shrek 3 . . . [But] because it got suspended by the MPAA, it wasn't possible to go out anymore on that date."

Tim Palen, co-president of theatrical marketing for Lionsgate, which released both Hostel Part II and the more successful Saw IV, says the wait for a Hostel sequel might have been too long. "One of the reasons the Saw movies do so well is because they come in rapid succession," he says. Hostel Part II "could have been better served if it was released earlier."

Of course, many critics might have a different answer for why Hostel Part II and Captivity didn't fare so well: They weren't that good. But even horror movies that were well liked by critics failed to gain traction. What happened to Grindhouse and The Mist? Easter and Thanksgiving opening dates, says Roth. "Everyone's with their families . . . Why did 1408 do so well, and why did The Mist not do so well? They're both supernatural horror movies [based on Stephen King stories]. I honestly think it's the weekend." Among the movies that did hit were Rob Zombie's Halloween, released at the very end of the summer blockbuster season; 30 Days of Night, in October; and Saw IV, on Halloween weekend.

And wouldn't you know it? Aliens vs. Predator: Requiem, now playing at a theater near you.