Deuces Wild tries for retro chic, but comes up a few cards short. 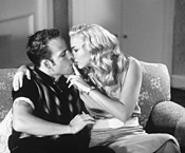 Deuces Wild is yet another new release that is now inexplicably being distributed theatrically -- rather than slinking away to the video/cable market -- after having explicably sat on the shelf for upward of a year. The film's age is immediately evident, both from how young Frankie Muniz looks (compared to recent episodes of Malcolm in the Middle) and from the cinematography credit to the great John Alonz (Chinatown), who died over a year ago.

This '50s-era Brooklyn gang-warfare film doesn't have all that much wrong with it. But there is nothing so right with it as to justify much claim on anyone's attention. Been there, done that . . . a thousand times already, and better.

For the record, Stephen Dorff, considerably more charismatic than usual, plays Leon, the head of the Deuces -- a gang he formed to protect his side of the block, after his little brother, Allie Boy, OD'd on smack back in 1955. Now it's 1958, and antagonisms are about to bust loose again. Marco (Norman Reedus), the dealer who got Allie Boy hooked, is about to get out of jail, and he's mobilizing the Vipers -- who control the other side of Leon's street -- to wipe out the Deuces.

Marco has a dual motivation: First, he wants revenge on Leon, who he assumes ratted him out to the cops on the Allie Boy rap; second, he plans on moving drugs into the 'hood on a much heavier basis than before, thanks to the sponsorship of the local mob boss, Fritzy (Matt Dillon). Even before his prison release, he starts giving orders to craven junkie Jimmy Pockets (Balthazar Getty), who also happens to run the Vipers. In the midst of all this, quite predictably, there is a Romeo and Juliet/West Side Story romance: Leon's not-very-bright younger brother, Bobby (Brad Renfro), falls in love with Annie (Fairuza Balk), sister of Jimmy Pockets. Bobby's torn loyalties cause more and more conflicts as the war begins to heat up.

There is always something new to say in a venerable genre like the teen gang film, but director Scott Kalvert and producer/screenwriters Paul Kimatian and Christopher Gambale haven't found it. Most of Deuces Wild rehashes bits from the classics, and the voice-over is reminiscent of Goodfellas, except without an iota of irony.

Dorff is more convincing here than he was in the first Blade film, and Balk is always fun to watch. The filmmakers seem to have gone berserk mining The Sopranos for the cast. While Drea DeMatteo and Louis Lombardi are well used, it's impossible to look at Vincent Pastore as the local priest without a giggle: "Father Big Pussy."

The actors labor long and hard to bring some semblance of reality to the proceedings, but the whole affair has a distinctly faux '50s feel to it. That is, none of the principals involved are old enough to actually remember the period, and smart money bets that their research more or less consisted of multiple viewings of Grease, which they apparently mistook for a documentary. And a plot hinging on the notion that smack dealers were preying on teenagers in white gang neighborhoods in 1955?

Kalvert gooses things up with some visual tricks, but there's not much he can do to camouflage the threadbare script.