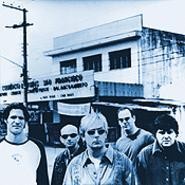 Bad ReligionOnly a few years ago, Bad Religion would have been the headlining act on this bill, which features the disposable San Diego-based pop-punk band Blink 182 as the main attraction. And given that Bad Religion's back catalog still sells well enough to line the pockets of former guitarist Brett Gurewitz (now the head of Epitaph Records), you could argue that Bad Religion, which has produced two decades' worth of punk rock, should be headlining this show. But then, there's the matter of its latest album, The New America -- a formulaic affair that finds the band going through the same old motions it helped define in the mid-'80s. Given that The New America was produced by Todd Rundgren (Cheap Trick, Rick Derringer, Felix Cavaliere) in a studio on an old sugar plantation in Hawaii, it's surprising that it sounds so similar to every other Bad Religion record released in the latter half of the '90s.

The echoing drums that kick off "A World Without Melody" and the synthesizer interludes of "It's a Long Way to the Promised Land" suggest Rundgren's contributions, but singer Greg Graffin's bellowing vocals and Greg Hetson and Brian Baker's bristling guitar work don't sound any different than they always have. Granted, Graffin, who's pursuing a Ph.D. at Cornell, is still one of punk's most literate spokespersons. He criticizes the high-tech world as someone who's intricately connected with it, rather than as an outsider nostalgic for simpler times. In "I Love My Computer" -- a song that features a woman's voice beckoning "click me here" -- he expounds upon the soullessness of interacting over the Internet. But Graffin explored a similar theme on the band's 1994 hit "21st Century (Digital Boy)" and isn't onto anything new here. While Bad Religion might be bereft of ideas, compared to Blink 182 -- a band most famous for running naked through the streets in its video for "What's My Age Again?" -- it seems like high art.