An old musical gets polished up for devilish merriment 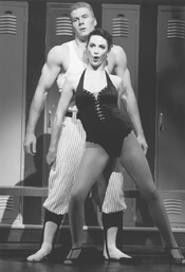 The greatest joy of Cain Park's Damn Yankees is the way it puts community spirit back into community theater. By evening's end, audiences are beaming as if they just won a free pizza after a rousing round of putt-putt. The production is overflowing with burgeoning young talent, as if the director wanted to make every parent in Cleveland Heights proud.

Director Terri Kent need not start dusting shelves for future Tony awards, but she could spruce up a ledge for a loving cup to contain the bonhomie her work inspires.

If you saw the 1994 Broadway revival of George Abbott's 1955 musical goosing of Faust and baseball, you didn't witness an authentic Damn Yankees. Instead, on display was a cynical, fiberglass vulgarization. Nineties inflation rendered a breezy artifact into a self-aware mockery of the '50s, where everyone seemed to wear neon clothes and refer to a litany of icons from Elvis Presley to Eisenhower. When Jerry Lewis took over as the devil Mr. Applegate on the road tour, the show made a quick retreat, so Lewis could do a "Jolson Sings Again"-like comeback. It became a two-hour Ed Sullivan Show with only one guest.

If one wanted to approximate those critics who score points by sneering, one could point out that, at Cain Park's amphitheater, there's a chorus of prancing baseball players, who move suspiciously like clubfooted Rockettes, in dances choreographed by John R. Crawford to be more fey than Fosse. There's a synthesizer that at times tends to grind musical chords to Cream of Wheat, as well as a cast that needs to liberally apply fake gray and greasepaint character lines to camouflage youthful visages.

Yet, the emotional truth lies in a combination of factors: the ingenuity necessitated by limited funds; restoration of the original script, and the aforementioned charming imperfections. They all conspire to exude a warm breath of life to defrost Damn Yankees into lovable entertainment.

This is a helium-light fantasy concerning a demented sports fan who wagers his soul with a deviled ham to win his team the pennant. Subsequently, he is turned into a young stud and pursued by a satanic seductress gone fatally good. This is the ideal mid-century musical, caught between the cotton-candy-spun lunacy of vaudeville and the emotional pull of Rodgers & Hammerstein, with a score of melodic Hit Parade heirlooms.

It demands effortless farceurs, beefcake song and dance virtuosos, and performers who can suggest golden-voiced replicas of Norman Rockwell's Americana. Above all, it demands dynamic personalities in its three leads to keep it from dissolving into Silly Putty. Forty-five years ago, it launched the careers of its original Mr. Applegate (played by Ray Walston) and seductress Lola (Gwen Verdon), and then a couple of years later, on film, it reinforced Tab Hunter's reputation as a stellar golden boy.

Now, in the Cain Park production -- from its remarkable rolling stools, used by the baseball widows to roll their tubby husbands around with ease, to Neal Poole's demented showbiz savvy, as the coach who leads his team in locker-room showstoppers -- we see the results of the director's victorious scavenger hunt.

The evidence of a truly eccentric performance is a divided audience, with some wanting to enshrine and some wanting to bury the performer in question. Eric van Baars's bleached-blond Applegate is just such a high-speed aberration. Here is a living dose of quicksilver encased in a magnificently gaudy, candy-red devil wardrobe. He's the ideal embodiment of flaming artificiality that the part requires. Constantly evolving in a history of show business, he is at one moment doing a Bob Fosse-ish snake dance in "Who's Got the Pain When They Do the Mambo?" (a number usually not danced by his character, but here given to him in a stroke of inspiration). Next, he's a Jack Benny effete with hand on cheek. In the number "Those Were the Good Old Days," he simultaneously sings like Jimmy Durante and moves like Fred Astaire.

Dana Hart, as Joe Hardy's aged alter ego, and Cynthia O'Connell, as his deserted wife, are far too young for their roles and consequently lack the necessary pathos.

Richard Adler and Jerry Ross's Damn Yankees was an exuberant follow-up to their other smash musical, The Pajama Game. Tragically, Ross died of a bronchial infection six months after Damn Yankees opened, waylaying a team that had the potential of entering the ranks of the Broadway immortals. We nearly dropped our pad when we were slapped on the back by a jubilant middle-aged theatergoer with a silver haircut, who exclaimed heartily, "Gee, wasn't that swell?" -- a touching testimonial to the enduring raptures of departed craftsmen.