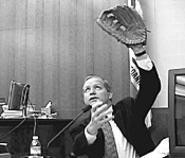 As everyone knows, home-run king Barry Bonds is a lovable fellow -- considerate of teammates and fans, courteous to reporters, invariably modest and selfless. So why in the world would the San Francisco Giants slugger choose to sabotage the efforts of a hard-working, badly paid documentary filmmaker before the guy can even get his first movie into theaters?

Okay, so maybe Bonds didn't actually intend to neutralize the effects of Michael Wranovics' well-meant Up for Grabs, which chronicles the absurd legal battle over the ownership of the baseball Bonds slammed deep to the cheaps for his record-setting 73rd home run of 2001. But come now, Barry, think about it. Just as Wranovics is putting the finishing touches on his cinematic labor of love, you upstage him with three or four explosive new melodramas that suddenly make the homer-ball dispute look as stale and irrelevant as week-old sourdough.

Thanks a lot, big guy. First, the steroids thing. Next, an alleged mistress who threatens to tell all. After that, serious IRS problems. At last, the big bombshell: In the wake of three knee surgeries and the rest of this irksome crap (all of it manufactured by the media, of course), you announce that you may not play until midseason or next year. Maybe never again. Pity poor Wranovics. He's reduced to inserting a pathetic disclaimer at the start of his film, acknowledging that new issues have recently arisen about Barry Bonds, but that "those questions can be saved for another movie." Sure. Given enough cameras, microphones, and free access to the Giants clubhouse, chimpanzees will eventually shoot that one.

Meanwhile, the old news. When, on October 7, 2001, Bonds struck his famous home run, a predictable frenzy erupted behind the right-field stands at what was then San Francisco's Pac Bell Park as fans scuffled for a nine-ounce lump of yarn, horsehide, and red stitching that might be worth a million dollars or more. To almost everyone's later chagrin, two unappealing figures emerged from the melee, each claiming to be the rightful owner of the ball. Alex Popov, the proprietor of a veggie-burger restaurant in Berkeley, said he caught the thing in his outfielder's glove, only to have it torn away an instant later. His antagonist, Patrick Hayashi, said he retrieved the ball from the concrete floor.

That was only the beginning. While Popov barked and brought a lawsuit, Hayashi refused to budge. A TV-news cameraman named Josh Keppel became known as author of "the Keppel Tape" (a low-rent variation on the Zapruder Film), which captured at least fragments of the incident. Partisan eyewitnesses emerged on both sides of the dispute, and assorted sportswriters, columnists, and TV commentators across the country began droning on about sport, society, and greed.

Wranovics interviews many of these people at some length, and while that may be crucial to his endeavor, the comments get tedious. "It truly is an American story," a pro-Popov dentist informs us. "Finders keepers, losers weepers," a pro-Hayashi voice declares. A newspaper type assures us that "a great athletic feat" has been compromised by a legal wrangle that's "a little bit disgusting." Some accuse Hayashi of biting a boy on the leg during his scramble for the ball. Giants executive Peter Magowan declares himself unsympathetic to both men, because "they whined and complained."

Brass tacks: In December 2002 -- two months after the Giants lost the World Series to the Anaheim Angels -- a San Francisco Superior Court judge ruled that Popov and Hayashi had equal claim to the baseball and ordered them to sell it and split the take. If there was any justice in the case, here it came: At auction, the ball brought "only" $450,000. The obsessive Popov's outstanding legal bills were said to be $640,000. He promptly sued his lawyers. The court has suspended payment on his share of the auction profits.

As another exposé of stubbornness, petty opportunism, and greed, Up for Grabs has some residual value. But that is gravely overshadowed -- especially for baseball fans -- by new revelations about the game itself. Witness Jose Canseco's inflammatory memoir about widespread steroid use. The appearance of ballplayers and major-league officials before a Congressional committee, and the evasive testimony of former slugger Mark McGwire. The biggest name attached to baseball's drug scandal is, of course, that of 40-year-old Barry Bonds himself, whose astonishing home-run production (703 and holding, within reach of records set by Babe Ruth and Henry Aaron) has now been called into question. If Barry was juiced -- and it looks as if he was -- every last dinger is tainted. Emerging into the sunlight after taking in this reasonably well-made, instantly out-of-date documentary, I couldn't help wondering whether comic-book mogul Todd McFarlane, the collector who bought Bonds' number 73 at auction, would now feel obligated to get out his felt-tip and mark the ball with a big, fat black asterisk.