Political upstarts are poised for a big year in Ohio. 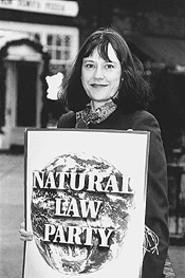 In Ohio this year, for the first time since 1982, the Libertarian Party will field candidates on the March 7 statewide primary ballot. They may be no more than a footnote in the final tally. But third-party candidates are dreaming great dreams about their role in the political process these days, especially after experiences like Sarina Grosswald's.

In the fall of 1996, two weeks after being pummeled by Democrat Jim Moran in her race for the U.S. House of Representatives in Virginia's 8th congressional district, Grosswald, a Natural Law Party candidate, got a call from her erstwhile opponent. Though she finished fourth out of five candidates in the election, pulling down a whopping 2 percent of the vote, Grosswald and Moran were hardly strangers. They had debated more than 30 times over the course of the campaign, during which Moran became impressed by Grosswald's emphasis on preventive approaches to health care, crime, education, and the environment.

Moran asked Grosswald and other Natural Party activists to help him set up a bipartisan congressional coalition that would focus on developing preventive measures in national health care policy. And he meant it. A year and a half later, Moran's Congressional Prevention Coalition was launched.

Granted, Jesse Ventura riding into the Minnesota governor's office on a wave of support from previously disaffected voters it ain't. But outside the Reform Party, which has staked much of its raison d'être on playing in the presidential sandbox, Grosswald's impact on Moran's policy goals was the kind of victory that is far more realistic for politicos operating outside the Democrat-Republican paradigm these days.

"I think, at this point, our organization is proving a point," says George Baluk, head of the Northeast Ohio chapter of the Libertarian Party, which will field candidates for congressional, state house, and state senate seats this year. "We just want to show people that there is an alternative out there."

Joining the Libertarians on the ballot this year, along with the Democratic and Republican parties, will be the eight-year-old Natural Law Party. In order to qualify, the upstart parties had to collect at least 33,542 signatures -- 1 percent of the ballots cast in the 1998 gubernatorial election. Ironically, the best-known third party, the Reform Party, will not be on the Ohio primary ballot, because it did not submit the required number of petition signatures. (The party can still qualify for the November general election, however, if it submits enough signatures to the Secretary of State's office by August 24.)

Officials from both the Libertarian and Natural Law parties have no illusions about the difficulties they face actually putting candidates in office this year. But that doesn't seem to have diminished their ambition or optimism.

"We really look at a sliding scale of success," says Zanna Feitler, state chair of the Natural Law Party. While getting Natural Law candidates -- or other candidates endorsed by Natural Law -- elected is a priority, she says, so is exposing voters to the party's core issues and its philosophical approach to governing.

For Natural Law, that means running campaigns that refrain from personal mudslinging while talking about the party's prevention-based approach to public policy goals. Founded in Iowa in 1992 by a group of people who subscribe to transcendental meditation, the party established a grassroots network that, over the last several years, has fielded candidates for office all over the country.

In Ohio, the Natural Law Party's biggest coup came in 1998, when Feitler ran for governor and was included in several televised debates against now-Governor Bob Taft and Democrat Lee Fisher. "I got 2 percent of the vote," boasts Feitler. "That doesn't sound like much, but that was 64,000 people. That really sent a message to Governor Taft. I'm able to talk to him if I have a real concern."

After that race, the party's membership doubled in Ohio to about 1,000 -- still minuscule compared to Democratic and Republican rosters. Feitler, who is planning to run for Cuyahoga County commissioner this year against incumbent Tim McCormack, says the party has a total of about 45 candidates ready to run for various offices around the state.

The Libertarians, after an almost two-decade absence from the ballot, have done even better. Buoyed by a several-year organizing effort, the party set a goal of running 100 candidates for office in 2000, according to Libertarian Party of Ohio chair Dena Bruedigam. As of last week (the filing deadline is January 7), Libertarians had more than 80 candidates slated, a quarter of whom will be running for office in Northeast Ohio.

Like Natural Law, the Libertarians have seen a sizable increase in their membership over the last several years. Part of that is due to a push by the national Libertarian Party, which has spent money on direct mailings to potential members. Baluk, head of the local chapter, believes the party's live-and-let-live ethos has also struck a topical chord.

"From a [personal] freedom standpoint," he says, "things have never been worse."

On a state level, Libertarians are calling for the repeal of E-Check, the legalization of marijuana for medicinal use, elimination of the state income tax, ending public subsidies for sports stadiums and arenas, and a right-to-carry (concealed weapons) law.

Does either party stand a reasonable chance of success? Thanks to Jesse Ventura, a growing number of voters no longer consider a vote for a third-party candidate a wasted one. Still, nobody is expecting a Libertarian or Natural Law Party-led candidate to ride into the Ohio statehouse anytime soon. In keeping with minority party expectations, making a dent in public policy will be enough.

"I think 2000 is going to be a truly amazing year," says Feitler, adding proudly, "We're the catalysts for change."