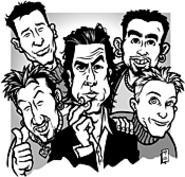 The supergroup is one of rock and roll's best innovations. Taking established talents and combining them with other, acknowledged stars is a no-brainer. Such a practice should be money in the bank, the kind of sure thing that keeps careers rolling and transforms the sycophantic blurbs of press kits from puff pieces into astute reporting.

When the supergroup works, it's a force of nature. Fugazi, everyone's favorite idealist punk outfit, is a supergroup (part Minor Threat and part Rites of Spring), and an ass-kicking one at that. Can anyone deny the power of Rapeman, which was one part Big Black (Steve Albini) and two parts Scratch Acid (David Wm. Sims and Rey Washam)? And is there a band alive that can compete with the Herculean havoc-wreaking of Bay Area-ish group Fantômas (which features members of the Melvins, Mr. Bungle, and Slayer)? These are supergroups a mother could be proud of: They combine the various strengths of the members to create vital music, while avoiding rehashing the past successes of the individuals' original bands.

But when it doesn't work, the supergroup is an abomination that makes fans grieve for the past and feel shame for the present. Who recalls the Last Hard Men, wherein the junkie members of the Breeders and Smashing Pumpkins joined forces with Sebastian Bach of Skid Row and Jimmy Flemion of the Frogs? (So strange it has to be true!) While not technically a new group, the Red Hot Chili Peppers added former Jane's Addiction shredder Dave Navarro to their lineup for the One Hot Minute album, a tepid CD that's nearly impossible to pawn off on used-record stores.

And now there's Audioslave. On paper, this is a troupe to get excited about: Rage Against the Machine jettisons its most annoying feature, nasal rapper Zack de la Rocha, and replaces him with the talented Chris Cornell, late of Soundgarden. Unfortunately, Audioslave doesn't live up to its potential. The group's eponymous debut starts off with the bang of "Cochise," but then quickly peters out with a slew of midtempo alt-rock songs. The disc's a damn shame, because Audioslave seemed like a sure bet -- Tom Morello's mutant guitar, a solid rhythm section, and a vocalist who can sing should have been better than this.

Such claptrap gets a person thinking: What sort of supergroup could revive you from your Audioslave coma? With this in mind, here are a few suggestions for all-star ensembles that we'd like to see. In a better world, the following acts would be heading for a venue near you:

John Cale joins Metallica: Metallica has lost another bassist, through no fault of its own. Last time, the band went for an unknown to replace the irreplaceable Cliff Burton, after briefly entertaining the idea of adding weirdo Les Claypool to the mix. This time, the band should cast farther afield and try to score avant-chameleon John Cale. His bass playing is granite (listen to the Velvet Underground's "I Heard Her Call My Name"), and should the thrashers ever return to their Paganini-on-steroids roots, Cale is more than capable of mixing it up all classical-like. Besides, Cale once hacked a live chicken to death with a machete before a horrified crowd, and Metallica fans could use a little terrifyin' these days. Another Cale trick was shooting at his unsuspecting backup singers (with blanks), which would come in real handy if Metallica opts to do another album with an orchestra. Someone slip Mr. Cale a clip of hollow points.

Tatsuya Yoshida becomes a member of Mötley Crüe: The Crüe hasn't been the same since volcanic drummer Tommy Lee split, and things won't get any better unless the longtime metallers recruit one-man whirlwind Tatsuya Yoshida, of Tokyo-based legends the Ruins. Yoshida is lightning fast and dead heavy, and has the additional skill of singing in his secret made-up language (in falsetto, no less). This addition would render lead vocalist and weakest link Vince Neil positively useless, and the Crüe could become a raging power trio with a shrieking drummer/vocalist. And, let's be honest, "Blimmguass sommvless" repeated over and over doesn't make any less sense than "There's a problem with the girls here on Earth, they stopped actin' dizzy." Mötley Crüe, look to the East.

Van Halen enlists Greg Ginn: Eddie Van Halen is drinking himself to death for the same reason Marlon Brando got fat: no more challenges. There's simply nothing to get the man's juices flowing, as there hasn't been a personality strong enough to stand up to Mr. Ed since David Lee Roth wandered off. Greg Ginn is Eddie's dark reflection: The former Black Flag and Gone axeman is just as talented, just as headstrong, and floundering just as much since he eliminated Henry Rollins from his life. But if Eddie and Greg had each other as foils, the resulting band (Gone Halen?) would be an instrumental juggernaut. Ginn and Van Halen would drive one another to new heights, each trying to outdo the other's solos. Imagine the breakdown in "Panama" replaced by the cascade of noise from "Three Nights." Friggin' goose bumps.

Nick Cave gets 'NSYNC: Even the staunchest Nick Cave fan has to admit there was something wrong with his last album, 2001's No More Shall We Part. It seems as if the pressure of writing all the material is getting to Cave, who's coming dangerously close to parodying himself, what with all the melancholy and maudlin hand-wringing. Maybe the Australian native should just focus on the singing for a while and let other people do the writing. Imagine Cave replacing Justin Timberlake in 'NSYNC: The boy band would immediately be taken more seriously, and Cave could learn to enjoy himself. All the disturbed, dark-attired teenage girls would have a pinup to call their own, and Cave would finally have a video played on MTV. One album and a flashy tour later, he could return to his piano feeling refreshed, refocused, and revitalized -- and he would never write anything as cheesy as "God Is in the House" again, although that song is still a better listen than anything by Audioslave.