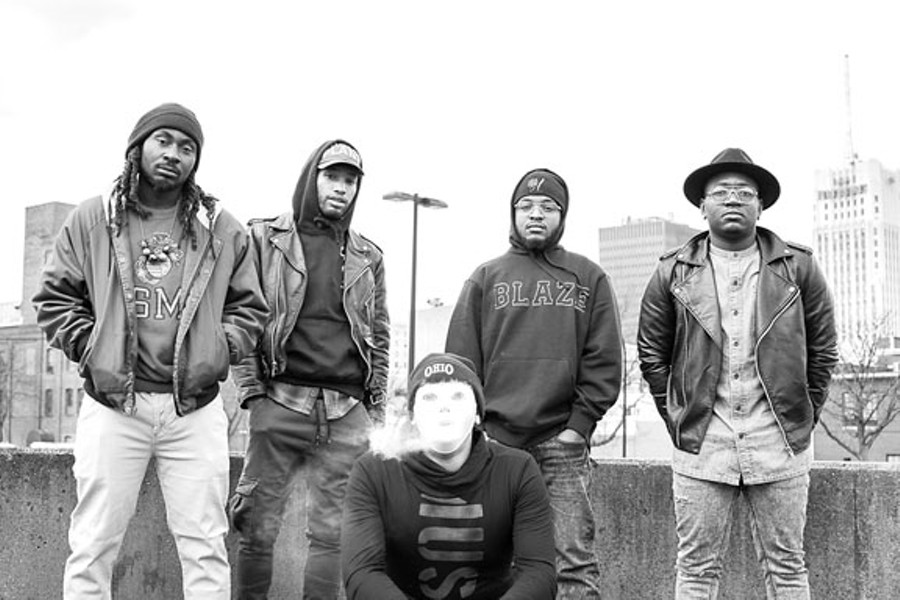 JUST THE TWO OF THEM: The Akron-based hip-hop group started as a duo. Best friends for years, Luminari and Styxx began performing together and even recorded an EP together before they recruited the group's other members. Luminari explains that Styxx originally wanted to play a variety of instruments like Prince. "That was a fragile blueprint of what we wanted to do," he says, "and then we went to an open mic and met the other guys and rehearsed, and it was a no-brainer." Then, three years ago, the group expanded its lineup. "The other musicians came around through our church," says Luminari. "Anytime we needed to do a live performance, we recruited these guys. They're like Styxx' little brothers. We did more and more shows and wanted to make it a five-piece." The band's music draws equally from the Roots, Phish, Rage Against the Machine and N.E.R.D. "I started everything because of [N.E.R.D. rapper and songwriter] Pharrell [Williams]," says Luminari. "I grew up listening to him."

MORE MUSIC ON THE HORIZON: In 2014, the band issued the EP One Night Standard. "We still play the songs on the EP but they sound different now that we play them as a band," says Luminari. Last summer, it followed up the EP with the single, "Party Time, Excellent." It's currently wrapping up recording an album of 7 to 8 tunes that it recorded at Central 8 Studios in Akron. "It's a different sounding album," Luminari says of the disc that's due out this summer.

WHY YOU SHOULD HEAR THEM: A jazzy number that draws equally from funk and rock, "Hulk Hogan" features tongue-twisting lyrics and a propulsive beat. "Party Time, Excellent" includes flourishes of guitar and a spacey R&B-inspired interlude that sounds like something Herbie Hancock might've played with the Headhunters in the '70s. "It's an example of the new sound," Luminari says of "Party Time." "The drummer is flourishing in that tune. Throughout our sets, we try to give everyone a solo. Our bassist is really good too. We'll feature him on a song and our keyboardist on a couple of other songs. The bassist and keyboardist work really well together. Our bass player studies Ray Charles and he can switch to new R&B. Our guitarist goes to Youngstown State and studies jazz. We'll have a rough draft of the idea and he'll work with us to expand the idea."

WHERE YOU CAN HEAR them: redrosepanic.com.

WHERE YOU CAN SEE THEM: Red Rose Panic performs with Ghost-Note