Band of the Week: Rocket from the Tombs 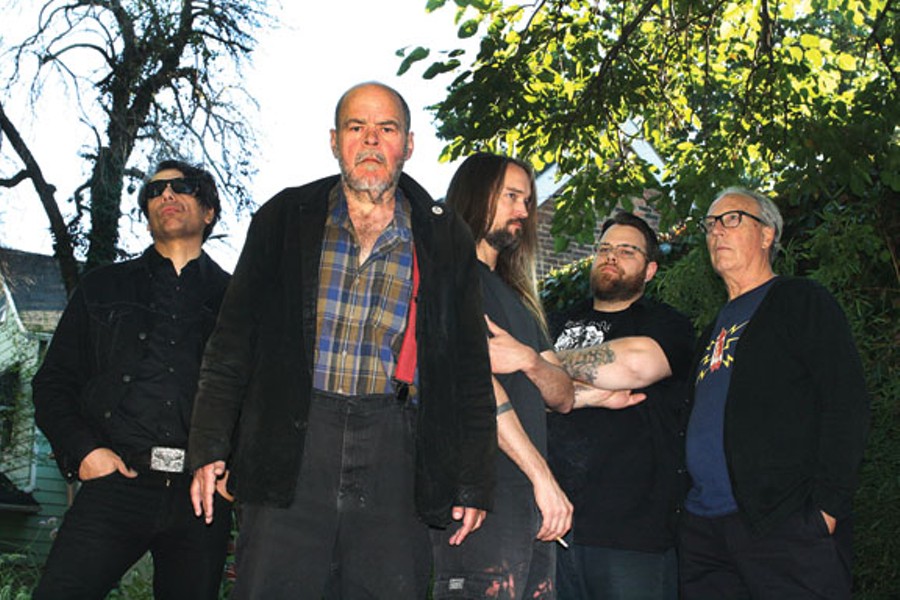 The proto-punk act Rocket from the Tombs only played the Cleveland area for about a year in the '70s before dissolving and then essentially spawning Pere Ubu and the Dead Boys. Still, the band left a huge impression. Led by burly singer David Thomas, a former Scene writer who calls himself Crocus Behemoth, the band has evolved since those early days when the original lineup featured guitarist Peter Laughner, an iconic punk figure who died in 1977, guitarist Cheetah Chrome, and drummer Johnny Blitz. Despite the changes in personnel, Thomas says the current lineup delivers on several levels. "The rhythm section is solid and reliable," he says in an email exchange. "The two guitars, Gary Siperko and Buddy Akita, are well-matched. They complement each other. They play solid rhythm parts that mesh and intertwine. They play leads, each coming from a different perspective. They're both hot players while neither minds doing the grunt work of holding things together when required."

The live shows still smolder as Thomas approaches them as a performance artist, regularly delivering his poetic lyrics with an unrivaled intensity. "Pile the amps on stage and go hell for leather — I think that about sums it up," he says when asked about the band's approach. "RFTT is a brutal rock experience. There is subtlety but it's all in the context of two guitars wound up to max and driving for the finish line. Stand back and hang on."

WHERE YOU CAN HEAR THEM:

Why You Should Hear Them:

The band started writing tunes on its most recent album, Black Record, back in 2012. It holed up at Suma Recording in Painesville to record the songs with engineer Paul Hamann. Album opener "Waiting for the Snow" features guttural vocals and sinewy guitar riffs as Thomas croons, "you're no friend of mine." The song recalls the best '70s post-punk, as does the hard-rocking "Welcome to the Dark Ages." The band even gives its classic hit "Sonic Reducer" another good go, capturing its raw power with the remake. One critic called the album the band's "fiercest" record yet. "I agree with it," says Thomas. "That's not to criticize other albums unfairly but each of the preceding albums had some flaws. We didn't have a good drummer until Steve joined the band. The Redux album was recorded quickly and without sufficient time or facility to correct some things. Barfly suffered for lack of preparation. Black Record had all the pieces fall into place."

WHERE YOU CAN SEE THEM:

Rocket from the Tombs performs with Unholy Two at 8:30 p.m. on Thursday, May 11, at the Beachland Ballroom.