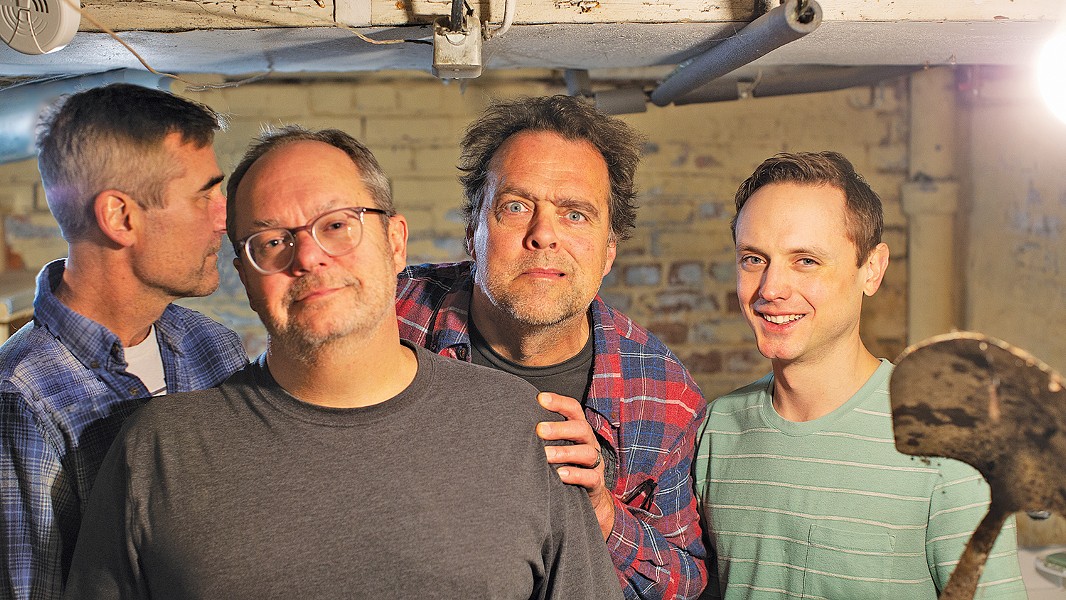 GOING STRONG FOR A DECADE: You might not know it, but this local band has been together for more than 10 years now. Singer-guitarist Todd has been in bands since the early '80s, and he formed Stupid Beautiful Heaven on a whim. "I gave up on doing music seriously but was still recording stuff in my attic," says Todd. "I got bored and wanted to have people to hang out with. I auditioned people more on who I wanted to drink beer with than anything else. We were terrible for the first year and a half. Then, we took a break, and we weren't terrible anymore. We actually became kinda good. It's snowballed from there. It's been the same line up through all these ups and down." Since three of the band members are "older," the band looks to the alternative rock of the '80s and '90s for inspiration. "You get to a certain age and you randomly find this weird station on the left end of the dial," says Todd. "I really like the Pixies and the Replacements and Soul Asylum before Soul Asylum turned into Bon Jovi. There was so much awesome music."

WIRT THE WAIT: Several years ago, the band started recording drums, bass and lead vocals at Crushtone Studios with Jim Wirt (Fiona Apple, Incubus, Brian Setzer). The guys then wrote more songs and went back to Crushtone last year. They recorded guitars and backing vocals everywhere from Todd's attic to Tom's living room to the choir room of Bill's church. They've spent the better part of a year mixing and re-mixing the album, This Rock Is Hard. "I knew Jim [Wirt] back in Los Angeles when I had my brief flirtation with major label success," says Todd. "When I realized Jim was living in Cleveland, I was so excited because he had this amazing studio. We did the drums and lead vocals live and then did backing vocals."

WHERE YOU CAN HEAR THEM: stupidbeautifulheaven.bandcamp.com.

WHY YOU SHOULD HEAR THEM: "Battlecry of the Aging Rocker" possesses a real urgency as Todd's hoarse vocals suit the call-to-arms tune perfectly, making it come off as if it were something the Alarm would've written back in the day. "If You Need Someone" features snotty vocals, and the pop-punk track has a Blink 182/NOFX vibe. Another standout, the mid-tempo poppy ballad "Romeo and Juliet's Little Sister" has a Cars feel to it. Through it all, a sharp sense of melody tempers the band's punk impulses. "Our bass player is really freaky about melodies," says Todd. "When I write, I get the words and chords and vocal cadence. Tom would tell me when a melody didn't go anywhere. A lot of it is me trying to impress my bass player."

WHERE YOU CAN SEE THEM: Stupid Beautiful Heaven performs with Cellophone Jane and Orange Animal at 9 p.m. on Saturday, Feb. 22, at the Happy Dog.