Band of the Week: Yellowstone Apocalypse 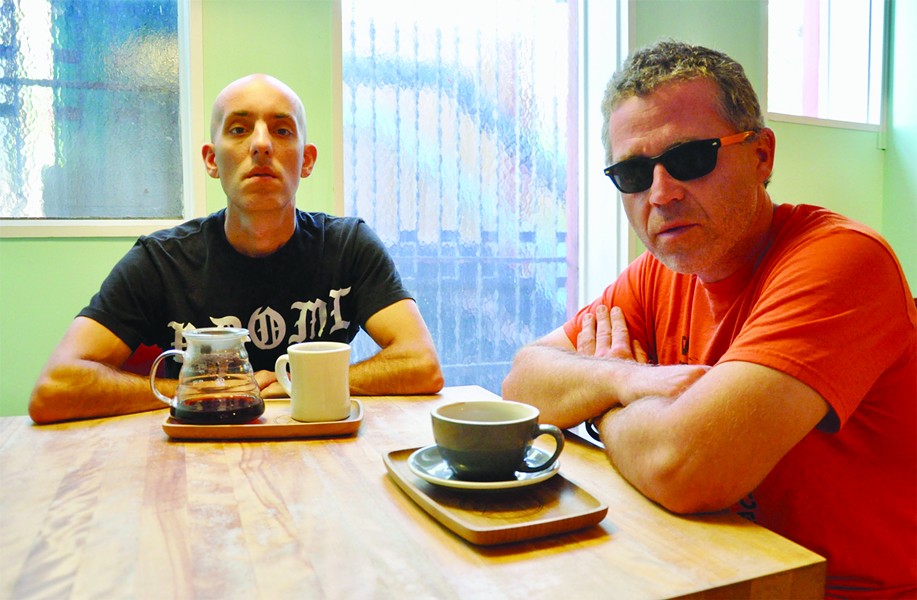 JUST THE TWO OF THEM: Tomino used to play in the avant garde jazz act birth and in the indie rock the Champion Bubblers in the late '90s before moving to New York for 15 years. A founding member of the bands such as Sopko/Laswell/Pridgen, Glimpse Trio and Golden Measure, Sopko has played with underground musicians such as Bill Laswell, Mike Watt, Dosh, Thomas Pridgen, Tyshawn Sorey, Simon Lott and Jamie Saft. "We both grew up in Cleveland and then moved apart," says Tomino. "We hooked up when Mike moved back in 2015. He came to a show I was playing and introduced himself. We started doing improvised jazz gigs as a duo."

MEDITATIVE SOUNDS: Tomino says he had a concept for a band that was loosely based on meditation and breath, and he and Sopko decided to give it a go. "There was no music written at first," he says. "We got together and played as slow as we could and as loud as we could. At the same time, we were practicing a lot of yoga. That's a big part of it and part of the foundation of the band. After we got together the first or second time, Mike wrote some music and we started hashing out some forms." They wrote the songs for their self-titled debut in the winter of 2015 and recorded in Tomino's basement. "We did it all ourselves," says Tomino. "I did the drums in one recording, and we overdubbed multiple guitars. Since it's just a duo, there might be six tracks of guitars. Once we had the forms solidified, it was about getting good takes. The sonics are important even though it's really visceral."

WHY YOU SHOULD HEAR THEM: The band's self-titled debut has an epic metal feel to it. As the band puts it on its Bandcamp page, where you can stream several tracks and download the music, it's a blend of "devastatingly heavy, painstakingly slow and joyful noise." "A Punishing Hit" features Sabbath-inspired sludge-y guitars; it's a song you'll want to turn up louder. The nuanced "Old Faithful," however, features a slow intro before the heavy guitars kick in. "It's an instrumental album, but we wanted it to have some depth with the tone and velocity," says Tomino. "Sunn O))) was kind of an influence. The songs have a punk aesthetic, but they're so deliberate, it takes a certain mindset to listen to the record." The release party at the Beachland will celebrate the album's digital release. The group plans to get on the road and play a few shows out of town and then write another album.

WHERE YOU CAN HEAR THEM: yellowstoneapocalypse.com

WHERE YOU CAN SEE THEM: Yellowstone Apocalypse performs with Oregon Space Trail of Doom at 7:30 p.m. on Friday, Aug. 25, at the Beachland Ballroom.