Bang Bang for Your Buck 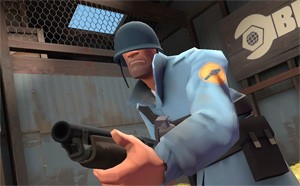 Whether it's $600 PlayStation 3s or the five bucks Nintendo shamelessly charges for 20-year-old NES games on the Wii's Virtual Console, gamers have gotten used to assuming the position when it comes to the costs of their hobby. So if you've just heard about The Orange Box — five of the best games around, all on one disc — it's understandable if your instinct is to sigh, pull out a credit card, and grab your ankles.

Don't squeal like a pig just yet: It's yours for a mere $60. Take heart that the life-ruining debt you've accumulated won't take an extra hit this month. The Orange Box contains the critically acclaimed first-person shooter Half-Life 2 and its two addenda, Episodes 1 and 2; the multiplayer first-person shooter Team Fortress 2; and the mind-bending puzzler Portal.

Surprisingly, Half-Life 2 isn't the standout here. Though still a top-tier shooter, the three-year-old game is beginning to show its age. Your alien opponents — who mostly stand in place when attacking and rarely bother to take cover when you shoot back — are more annoying than threatening, and the frequent puzzle-solving elements will bore those who play first-person shooters to, ya know, shoot things. Fortunately, the game's two follow-ups are more polished experiences. And though they're short — Episodes 1 and 2 can be finished off in a weekend — they're entertaining, with none of the bouts of tedium that mar Half-Life 2.

Enter Team Fortress 2. In a genre where every online shooter vies for the title of bleakest and grimiest, Team Fortress 2's colorful, cartoony aesthetic is a sight for sore eyes. It's a war game à la Pixar, with hulking, dim-witted brutes hoisting chain guns and Aussie big-game hunters serving as the snipers. Players pick from nine character types, each with obvious strengths and weaknesses, and the included arenas are brilliant. For serious fans who don't take themselves too seriously, TF2 is a godsend.

But The Orange Box's real star is Portal, which is best described as a "first-person puzzler." Players wield a gun that sci-fi fantasies are made of: Not a weapon, it actually opens opposite ends of a wormhole, the pairs forming a "portal" to travel from one point to another. Say you're in a room with an inaccessible upper level: Fire one portal up there, another on the wall in front of you, waltz through, and voilà — you're there.

Your mission is to escape, which would seem an easy task with such a device. But it's actually incredibly tricky, thanks to the designs of the rooms you're in: You'll soon be performing complicated pan-dimensional gymnastics that are impossible to describe.

Meanwhile, your progress is critiqued by a female voice, who promises a party in your honor if you escape the increasingly complex and dangerous rooms . . . but you can't help thinking she has something else in mind. And without spoiling anything: Players who complete the game are treated to the funniest, most bizarre song ever played over a game's credits.

Considering almost any part of it is worth $60 on its own, The Orange Box is one of the best gaming values to come along in years. Getting all five, including the most innovative puzzle game since Tetris? Move on this, piggies.