At SXSW, it's all about the buzz, not the Buzz Band. 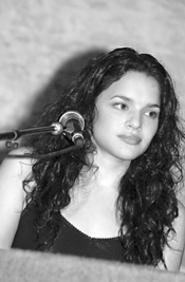 Dan Bryk, a frumpy Canuck who refuses to give his age but looks to be in his 20s, sits on an outdoor patio behind his Yamaha keyboard and sings his ass off. This isn't such an easy task -- the dude's heavy, literally. It's 9 p.m. on a Thursday night in Austin, and the club at which Bryk's performing, Melagio on Sixth Street, is nearly empty; most of the patrons consist of should-be strippers touting Jack Daniel's drink specials. Bryk's audience consists primarily of passersby listening in from a side street, including a model-hot blonde leaning in and staring lovingly at the disheveled wreck singing about chunky girls and the pervy boys who luv 'em so.

Bryk's one of those performers who comes to the South by Southwest Music Conference and Festival each year in search of that elusive label deal. But there was little chance that Bryk's showcase would amount to more than a long drive back to Mississauga, Ontario; few have emerged from SXSW with lucrative contracts in recent years, as the music biz has cut away the fat (no pun, seriously) and tried to go lean in these downer days of Internet downloading, post-September 11 hangovers, questionable accounting practices, royalty scams, payola allegations, and the megamergers that have resulted in thousands of label firings and hundreds of bands getting dropped from their deals. When was the last time a band got signed at SXSW? Best we could figure, it was Veruca Salt. There is a reason that, in 2001, according to Lorraine Ali and David Gates in a recent Newsweek, blank CDs outsold prerecorded ones.

A few weeks before SXSW began on March 13, Hilary Rosen, president and CEO of the Recording Industry Association of America -- the trade outfit that reps the major labels, usually at the expense of the people who actually make the music -- told a Senate committee that, in 2001, album sales were down 10 percent (or some $600 million). Most of that, she insisted, was due to the illegal pirating of music over the Internet -- according to Rosen, 23 percent of music consumers said they didn't buy more music last year because they refused to pay for what they found for free. During a panel talk at SXSW, she also insisted that sales slumped because consumers said they can't find what they're looking for -- which doesn't quite explain how the Grammy-winning O Brother, Where Art Thou? soundtrack has sold more than 4 million units and, more than a year after its release, has touched the top spot on the charts without aid of any radio or MTV airplay. Maybe people just don't want what Rosen and her bosses are offering; she never considers that.

But no one attends South by Southwest's music fest to be lectured to or to learn. They come instead to catch what SXSW keynote speaker Robbie Robertson called "the music fever"; they drive to Texas to play short showcases, to listen to bands from Japan and Sweden and Germany, to bask in the buzz, and perhaps sneak away with a fistful of discs from bands heretofore unknown outside Dayton, Ohio, or Aliceville, Alabama, or Vienna, Austria. They come to discover the secrets and speak the secret language ("They're like Can crossed with Wilco if they were fronted by Brian Eno or Neil Finn"), and to one-up each other ("Dude, I just saw the best Japanese stoner-rock-free-jazz-Kraut-rock-hip-hop band, like, ever!").

The biggest problem, if one can call it that, with South by Southwest is one of plenitude: To catch one potentially good band, you run the risk of missing a dozen great ones at any given moment. The Eels were astonishing from the jump: Two songs in, frontman Mark "E" Everett led guitarist Joe Gore (of PJ Harvey's band) and drummer Butch through a dank, sinister rendition of Missy Elliott's "Get Ur Freak On"; you couldn't tell whether to grin or run. Behind his sunglasses and Unabomber beard and beneath his wool cap, Everett made a beautiful noise, vacillating between a punk rock circus and a high school recital. For its effort, the band was rewarded with that rarest of SXSW occurrences: an encore.

Just as perfect was Neil Finn, the former Crowded House frontman, blessed with a band that features Wendy Melvoin (ex of Prince's Revolution), Lisa Germano (who's released her own excellent albums on 4AD), and ex-Soul Coughing bassist Sebastian Steinberg. Finn proved, over the ruckus made by most SXSW attendees (who still wanna be the next Nirvana, apparently), that a man in his 40s can still make rock pop.

The keys-playing, soft-singing Norah Jones, backed only by guitar and bass, weathered the chattering of attendees who preferred to listen to their own droning voices during her Thursday night showcase. Bless her, she possesses the kind of voice, the kind of soul, that cuts through the static and chitchat of the uninterested and disaffected, for whom she's just another Next Big Thing fresh off the RIAA assembly line. Maybe the most amazing thing about Jones is how sweet and naive she sounds, like a newborn unfettered by the bullshit.

But the greatest South by Southwest moment is one that replays itself each night and has for years. For hours and hours, Mary Lou Lord -- onetime Sony Music signee and former Kurt Cobain lover -- plays outside a downtown Austin strip mall. She will strum and sing from 10 p.m. until the drunks and deviants run her off the corner. At 3:30 a.m. on Saturday morning, Lord, clad in red jacket, endured the shouts ("Jewel!" screamed some smartass filing out of an after-hours party nearby) and serenaded the chilly night and the curious and bored and stoned.

Near the end of her set, she sang "Thunder Road," and in that setting, it sounded sad and brand new -- like she'd written it on the spot, for anyone who cared to listen. She sang of promised lands, of how people scream your name at night, and about how she was gonna get out of this town full of losers. "I'm pulling out of here to win," and for that moment, you kinda believed her.