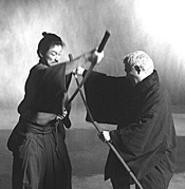 Say hello to a pop cinema masterpiece. This new Japanese import opens with a massive thud not unlike Godzilla's footfall, and its cinematic legacy stretches back almost as far. It's got crafty samurai action, hilarious bits of business, insightful observations into the human condition, and geysers of kitschy computer-generated blood. Oh yes, and utterly thrilling tap-dancing. Really. The title is The Blind Swordsman: Zatôichi, and it's sensational.

For those who were busy between 1962 and 1989 and accidentally missed the 26 previous Zatôichi features and more than 100 Zatôichi TV episodes (all starring the late Japanese icon, Shintaru Katsu), here's the gist: The character is an itinerant early-19th-century semi-hero and former yakuza who makes his living as a masseur and gambler. He also happens to be blind. He also happens to be able to destroy just about anyone with his mighty sword, which is cleverly disguised as a cane. James Bond, Zorro, and the Lone Ranger would swiftly learn to bow to Zatôichi. Yoda would be a reasonably close match. He's a pop legend par excellence.

With this in mind, one senses that the risk in dusting off this franchise is about equal to redoing The Planet of the Apes -- and they're still fumigating some cinemas after that colossal stink-bomb. All the more reason to cheer Japan's artsy maverick Takeshi Kitano (Fireworks) for rising to the occasion and doing a crackerjack job of "re-envisioning." By most accounts, Chieko "Mama" Saito, a septuagenarian show-biz entrepreneur and former stripper (and friend-investor of Katsu, who died in '97) enlisted Kitano to exhume and revivify Zatôichi. The gamble has paid off gloriously, springing Kitano from the art-house ghetto and launching a roaring crowd-pleaser that'll have Hollywood hustling to learn fancy new moves.

Upping the ante, Kitano not only writes and directs, but also stars as Zatôichi, under his performing name, Beat Takeshi. You'd never guess that he was lukewarm toward the original material, so skillfully does he invest his energy in this updating. From the opening moments, with the blind swordsman sitting beside a rural lane, his coy poise and cropped, bleached hair setting him apart from locals like some weird, heretofore unknown Asian Pet Shop Boy, one can sense the reinvention at work. The scene involves a band of smugly cruel marauders, several dismemberments, and gallons of blood, and it functions with the precision of a carefully sharpened hook. We immediately know we're in for generous, outrageous, theatrical fun.

Kitano could have kept the whole film at this level, letting the elegant, hyperkinetic fights take over his whole endeavor, but instead he strikes a fine balance between extreme violence and sensitive characterization. The plot itself is but a trifle, a launchpad: A notorious gang, headed by its nasty kingpin, Ginzo (Ittoku Kishibe), is harassing a helpless village, and only you-know-who can save the day.

In this, his first period production, Kitano gives us a fully plausible environment, filled with complex interactions, and a finale that may have you literally dancing in the aisles.