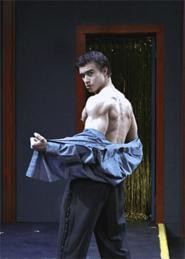 The reactions human beings display as they watch others reveal their bodies are amazing to behold. CBS is fined over half a million dollars for broadcasting a female nipple for one second, while Howard Stern is paid handsomely to have topless strippers lick Dream Whip off each other's breasts on cable TV. Do we sense just a teeny bit of contradiction in this love-hate relationship with our anatomy?

It sure seems evident in The Full Monty, the play adapted from a British movie that advertises what it never delivers. The title famously refers to total nudity, a state of undress that is never visible onstage, due to a blinding lighting effect at the crucial moment. But that is only the last in a series of disappointments in this Beck Center production, which flatlines as frequently as a Dick Cheney EKG.

One signal of a certain inattention to detail is that the show's program nowhere mentions the names of the people who created it: script adapter Terrence McNally, along with composer and lyricist David Yazbek. (No, it's not likely that they requested this deletion, although had they seen this production, the thought might have occurred to them.) Though there are performances that gleam ever so brightly, they are quickly submerged in the muck of odd directorial decisions, a brutally inconsistent sound system, and the most brain-dead set design in recent memory.

Thanks to the popular movie, the plot of The Full Monty is familiar to most. A group of unemployed blue-collar grunts in Buffalo, desperate for cash flow, decide to mimic the Chippendale male strippers who are making their wives jelly-legged at the local nightclub. Our clock-punching heroes pick up strays for their group, including a suicidal momma's boy and a talent-challenged fellow who's hung like a Clydesdale. Eventually, the motley crew decides to go the pros one better by getting totally naked at the end of their dance.

To tell this tale was a struggle on opening night, as Richard B. Ingraham's erratic amplification system reduced some dialogue to a whisper, while other snatches of words pinned the volume needle. When audible, though, McNally's humor peeked through. As the two lead guys -- ordinary Jerry and hefty Dave -- gaze at a ripped and rippling male in the club's poster, Jerry observes, "We could look like that. It's a choice." And Yazbek definitely has a way with inventive rhymes ("When you're swinging your cojones/You'll show 'em what testosterone is"), even though his melodies are often forgettable.

But the staging sabotages the material at every turn. Somewhere toward the end of the first act, it becomes evident that Don McBride's stolid set is never going to change. Looking like the bland and boring back end of an industrial park, with two overhead garage doors flanking two entry doors, the boxy and immobile structure just occupies space without using it to complement the flow of the story. And Director Scott Spence, who usually has an unerring feel for pace and characterizations, lets his cast shuffle off in all directions. He allows gifted Maggie Stahl to go way over the top in the nondescript ditty "Life With Harold," yet he underplays the funniest tune in the show, "Big Ass Rock," a tongue-in-cheek anthem to assisted suicide.

Among the men who dare to bare all, Keith Faris as Jerry has a confident presence, although his voice is strained and flat in some songs. Kris Hebble has the physical dimensions for Dave and is rather sweet as he sings an ode to his gut in "You Rule My World," but he's too unintentionally awkward at other times to develop the pathos of his character. In the role of the nebbishy Malcolm, Patrick Janson has the best comic timing and uses his deadpan expressions with dexterity.

The unquestioned highlight among the women is Lenne Snively as the boys' been-there, done-that rehearsal pianist, Jeanette. With a cigarette bobbing from her lips like a conductor's baton, Snively gives a master class in how to deliver a punch line. And her "Showbiz Number" at the start of the second act is a blast, as she compares her left-footed brood to "a putz museum." Contrast that with Nicki Stacey (Jerry's ex) and Lisa Spinelli (Dave's wife), who miss all the beats in their scenes by playing conjured emotions, rather than real moments.

It's too bad this production doesn't end on its high point: the audition of "Horse" Simmons, played by Elliott Hooper, who handles the song "Big Black Man" with silky and sexy moves, belying his bad hip and plus-50 age. Instead, we are given the Faux Monty, egged on by shills from the cast who filter into the audience, hooting and screaming through the finale. All that's missing are the cattle prods to induce an undeserved standing ovation.