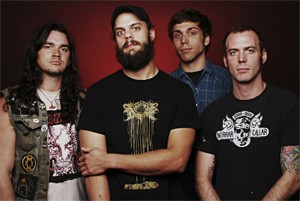 Baroness' Red Album is one of the best psychedelic hard-rock albums of the past few years. Calling it "metal" would be a stretch, but it is heavy and engaging. The real question is, why is Baroness headlining over these other three bands? Converge is one of the most forceful — not to mention assaultive — mathcore/metalcore groups around, with Jake Bannon's bloody-throated shrieking the perfect complement to his bandmates' jagged riffing. Genghis Tron's second album, Board Up the House, is much better than its debut record. But like Baroness, the band isn't exactly a metal one. Between the programmed drums and blurting, zapping analog synths, it's more like intelligent dance music with Cookie Monster vocals and random bursts of guitar. Meanwhile, the Red Chord plays ultra-complex, thoroughly pop-unfriendly mathcore, with tons of spazzy soloing and a relentless, pummeling vibe that's exhausting to listen to on CD. Imagine it at concert volume. Without a doubt, this is one of the most genuinely multifaceted heavy-rock bills on the road in some time. No matter what you're into — from stoner-ish groove to nerve-attenuating rhythmic shifts — you'll find something to like. And probably something to hate.