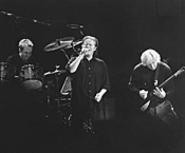 Even the hippest, youngest-at-heart clubgoers have nights where Pabst and a stack of amps don't equal the perfect mood. The Grog Shop, Cleveland Heights' home for local and national live music of all stripes, is responding with the newly opened B-Sides liquor lounge. It's a subterranean alternative to the upstairs club's trademark indie-rock aesthetic.

The room is a small, circular tunnel, with sleek furniture tucked into nooks in its darkly painted brick walls. Music -- everything from soul to midtempo electronica - will be spun nightly. DJs Se7en and Reemycks co-host Flat-Out Sundays, reaching into a deep crate of records to spin hip-hop, old-school funk, break beats, and dance cuts.

In July, the Grog relocated from its longtime home on Coventry Road to a bigger building with multiple levels on Euclid Heights Boulevard. B-Sides has been in the works ever since, its planned opening pushed back nearly two months after a burst water pipe flooded the space in August.

· The Cuyahoga Falls rock club Voodoo is switching its admission policy from all ages to 18 and over, beginning in November. Voodoo is a straight-up-rock counterpart to the Lime Spider, the downtown Akron club that leans toward alternative sounds. Owned by Markus Sterle and Shawn Hackel of the modern-rock band Cyde, Voodoo hosts local hard-rock bands up to seven nights a week, occasionally bringing in national acts like E'Nuff Z'Nuff. Management says the move is purely economic and that the club will continue to host occasional all-ages events.

· Ripper Watch: Akron-based heavy-metal hero Tim "Ripper" Owens made a name for himself as Judas Priest's second frontman. Now he's emulating the work of another group of seminal Brit headbangers: Iron Maiden. On October 28, Ripper will make his debut with Iowa-based metal militia Iced Earth via the "Reckoning" EP. The disc's cover features an adaptation of the image from the 1983 Maiden classic, "The Trooper." Keeping with the historical theme of "Reckoning" -- the EP closes with a 32-minute epic inspired by the battle of Gettysburg -- Maiden mascot Eddie has been replaced with a screaming skeleton dressed in the gear of an American soldier circa 1863, wreaking havoc on the battlefield.