May 09, 2002
comment
Romeo and Juliet Presented by Great Lakes Theater Festival at the Ohio Theatre, Playhouse Square, 1519 Euclid Avenue Through May 19 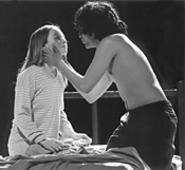 The line between inspiration and desecration can be very tenuous. A couple of years back, Daniel Fish, a maverick classical director, came perilously close to straddling that line with a Twelfth Night drenched in Salvador Dalí imagery. Courtiers clad in what looked like Saran Wrap, along with collapsed pianos on a beach, managed to imbue a tongue-in-cheek grotesquerie that strangely served the neurotic ardor of Shakespeare's comedy.

This year, in a return engagement with the Great Lakes Theater Festival, Fish directs an infantile Romeo and Juliet that negates the play's adult authority figures and panders exclusively to youthful narcissism. Replete with a little girl reading the lines of the Duke, this production crosses that dangerous precipice between interpretation and diminishment. Thanks to Fish's abridgements and his affectations, there is little left but effect for effect's sake.

The self-indulgence is especially galling because it painfully abuses its natural resources. Should those in the audience sagaciously shut their eyes, they would be privy to a well-spoken but oddly truncated text. The professional cast pulls off the most vital task of classical theater: making every syllable crystal clear and meaningful.

Margot White brings an invigorating snap to her Juliet. She manages to lovingly delineate the many facets of her character. Impatient, meddlesome, proud, and insinuating, she evolves from bleating lamb to a woman of tough resolve.

Jesse J. Perez plays Romeo in the manner of a sullen pizza-delivery boy. His performance is effective in the context of this production, though it lacks the poetry that one would hope for in literature's most famous lover.

In the foolproof role of Juliet's nurse, Franchelle Stewart Dorn displays the necessary comic timing and bawdy warmth. As Lady Capulet, Laura Perrotta accomplishes the amazing feat of embodying elegance in a flannel bathrobe, and J.C. Cutler makes for an emotionally complex and volatile Lord Capulet.

Despite these valiant efforts, it's hard to know where to begin to catalog the crimes against Shakespeare that take place on the Ohio Theatre stage. Anyone unfamiliar with the text would be in utter confusion, from the opening scene on. Instead of the crucial battle between the Montagues and Capulets, there is an uprising by a bunch of anonymous thugs tossing furniture about. Without an understanding of the imperative feud, there is no social context.

Every time there is a fatality onstage, the odd little girl standing in for the Duke filches the victim's shoes: a form of symbolism as enigmatic as anything in James Joyce's Finnegans Wake. With no balcony, the star-crossed lovers must play their immortal wooing scene scurrying over the walls like besotted cockroaches. There appear to be no gangs, only odd Bohemians in search of a Rent revival.

Mercutio (psychotically played by Teagle F. Bougere) is the unquestioned village idiot, rendering the immortal Queen Mab speech as if in the midst of primal-scream therapy. His death is staged like a free-for-all that's followed by one of the most misconceived cross-pollinations of styles in the annals of live theater. After Mercutio and Tybalt have fought their deadly duels with sabers, Romeo pulls out a pistol and guns down his hot-blooded in-law. Not only does this make him a cold-blooded murderer; even more horrendously, it makes him a blatant plagiarizer of Raiders of the Lost Ark. At this point, four hundred jaws in the house collectively drop.

There are more absurdities where that came from. The exiled Romeo suddenly appears, Ziegfeld Follies-style, descending on an overhead swing and hurling dollar bills on the dead Mercutio, who doubles as the apothecary. As the pièce de résistance, the Capulet tomb is decked out with the shoes that little Miss Duke has been acquiring throughout the evening.

It takes a major talent to be this awful and pretentious, and director Fish seems to have no limits. The ultimate danger of a production of this caliber is that the audience may be tempted to commit suicide before the characters do.