The tragic tale of the Poti-Lite. 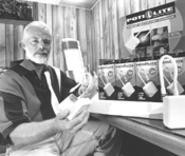 Big ideas don't always come with a bolt of lightning or a light bulb switching on in a cartoon bubble. Sometimes they arrive in the mellow green glow that leads drunks to the can in their darkest hour.

That glow would make Don Horn obscenely rich and place him alongside the great minds of our time. Henry Ford. Thomas Edison. The dude who thought up the Pet Rock. No longer would he be just a lowly Akron boiler engineer. No, he'd be Don Horn, progenitor of the Poti-Lite.

Technically, Horn was the fourth guy to invent a night light for your toilet. But he was the first to make an inexpensive model that didn't drain the battery.

"Originally, what happened is my wife fell in the toilet a couple of times in the middle of the night," he says of his epiphany. "Somebody didn't put the seat down."

Inspired, Horn went to Radio Shack and "got a couple of things together, an AC/DC converter and an LED. Just a tube with an electric cord coming out of it. I just bent it over and put it on the rim. And it lit the toilet up nice. That was it. It solved the problem" of crooked peeing.

That weekend, his wife, Cheri, was hosting a shower -- his big chance to test-market the Poti-Lite on a houseful of unsuspecting women who lived with imprecise men.

"All the girls raved about it, so I made a bunch of little ones." It was too good not to inflict on the masses. He shelled out $25,000 for a patent and a streamlined prototype.

"It was a little scary," says the white-bearded entrepreneur, who was 40 at the time. (He's 52 now.) "We didn't realize how much it was gonna cost. But I consulted my wife and my parents. I guess now I wish they didn't believe so much."

Once the production lines rolled, Horn was buoyed by letters from grateful couples, inspired to give their marriages another try. The toilet seat had become a gulf between them, and the Poti-Lite had bridged that gulf.

Some also suggested alternative uses. One guy used it as a night light for his wheelchair. Parents of newborns hung it on cribs, cat owners looped it on the litter box, and night fishermen baited their hooks by its hands-free beacon. A California couple, trapped in the rubble from an earthquake, even used the Poti-Light as an emergency lantern.

"The roof was totally down in their bedroom," says Horn. "They crawled to the bathroom, and the Poti-Lite was the only light working in the house. It guided them to safety."

Ready to expand, Horn signed on with a practiced agent who brought much-needed mystique, ushering corporate clients into a dark bathroom to behold the Poti-Lite's emerald radiance. "They'd come out, and they were sold on it," Horn recalls.

At least Ovation, the "As Seen on TV" company that marketed Suzanne Somers's Thighmaster, was sold on it, signing a contract to make 150,000 Poti-Lites. A few months later, they sent Horn a $37,500 check, an occasion celebrated with a limo ride, steak, and champagne.

Six months later, another check came, followed by a letter that Ovation had gone bankrupt, thanks in part to a failed investment in the Body Slide, a piece of aerobics equipment endorsed by former Charlie's Angel Cheryl Ladd.

It was then that Horn's dreams began to spiral down the crapper. The bankrupt company still had 20,000 Poti-Lites languishing in its warehouse. Horn bought them for 50 cents each. He also dumped his agent, whom he caught cutting questionable side deals for Poti-Lites in Central and South America.

"They were gonna get them for 50 cents wholesale, and they were gonna dump 'em for $2.50," says Horn. "Brazil was one of their biggest customers."

His new agent soon had a "big wheel" from Kmart drooling over the Poti-Lite. The company wanted 200,000, right away. "We started to celebrate again," says Horn. "We just went out and had a good time."

But the deal went sour. The Taiwanese factory that was now producing the Poti-Lite couldn't deliver them in time for Christmas. By then, Horn, who describes himself as a "little average blue-collar worker," had racked up $60,000 in debt.

"Wal-Mart said they liked it, but they wanted it made in the United States," he laments. "They said they'd give me $3.50 each for them. But to have them made here in the States, it was gonna cost me $3.55."

Next stop: the Home Shopping Network, where the Poti-Lite "made it to a board meeting. But in the end, they didn't want it because it wouldn't show up on TV. You really need a dark bathroom to get the full effect. Plus, I think it just came down to the fact that it was something with a toilet. I thought we were in, too. I thought that was a no-brainer."

Now Horn, his house crammed with about 19,988 "automatic toilet illuminators" (he's marked them down from $14.95 to eight bucks and sold a few on the Internet), is thinking he's the no-brainer.

"It's tough to feel successful when you're $85,000 in the hole," he says, referring to his net loss. "I'm at the point where I'm kind of numb. But even now, if I would get sick or injured, we'd have to sell this house and move into a trailer."

That said, wife Cheri would still put out the welcome mat.

"I'm not so proud," mutters a dejected Don. He'd like to forget about the light at the end of the tunnel, especially if it's hooked to the loo. But he still keeps a Poti-Lite burning in one of his three bathrooms, for old times' sake.

And the third? It's used for storage. Twenty thousand surplus Poti-Lites are more than a broom closet can hold.