A rudderless German springs to life with the help of zydeco music. 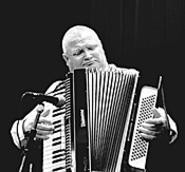 Almost as wide as he is tall, with a round but unremarkable face, Schultze doesn't look like a rebel. Truth to tell, he looks like Curly of Three Stooges fame or, less kindly, a mass murderer (well, he does bear a passing but disturbing resemblance to John Wayne Gacy).

Schultze -- whether that's a first or last name is unclear -- is the unlikely hero of Schultze Gets the Blues, an exceedingly dry German comedy with so little dialogue that to say it's in German with English subtitles is almost stretching the truth. Audiences who like their humor minimalist will laud the film as droll. Those who don't will label it slow and rather tedious. Make that slooooooow and tedious.

The stout, taciturn, innocuous Schultze (played by Horst Krause) has worked in the salt mines all his life. When the mine's employees are suddenly laid off en masse, the mid-fiftyish bachelor is left with unexpected time on his hands -- and nothing to fill the hours. He putters around his garden, which is populated by two-foot-high gnomes; drinks beer at the local pub and goes fishing with his buddies, Jürgen (Harald Warmbrunn) and Manfred (Karl-Fred Müller); visits his elderly mother at the nursing home; and practices the same tired polkas on the accordion that he has played for years.

This simple man, who almost unconsciously has derived comfort from the undemanding routine of his life, suddenly finds himself adrift. One evening, while listening to the radio, he hears a rousing, toe-tapping blend of fiddle and accordion that instantly grabs his attention. It's zydeco music, all the way from the bayous of some distant land called Louisiana.

This accidental brush with an unfamiliar tune grows into a quiet obsession for Schultze. He picks it out on his accordion and plays it over and over again. He reads up on Louisiana and its Creole-Cajun culture -- even learns to cook jambalaya, which he proudly serves to Manfred and Jürgen. The two men don't know quite what to make of their friend's new interest, but they try to be supportive.

Not so the other townspeople. When Schultze plays the new tune -- rather than the expected traditional polka -- for the local music club, the gathering is horrified. Several disapproving attendees grouse that Schultze's father, himself a devout accordionist, would roll over in his grave if he'd heard his son today.

The only person who seems to appreciate Schultze's evolving musical tastes is Frau Lorant, a lively resident at his mother's nursing home. Manfred and Jürgen conspire to send Schultze to a music festival in New Braunfels, Texas, which apparently is their town's sister city in America.

The rest of the film follows Schultze, who speaks practically no English, as he commandeers a broken-down barge, turns East, and heads downstream toward the swamplands of Louisiana.

Writer-director Michael Schorr, who makes his feature debut here, seems to have borrowed a leaf from Aki Kaurismäki's book. The irreverent Finnish director (Man Without a Past, Leningrad Cowboys Go America) is best known for his absurdist comedies, usually set in desolate landscapes (one always expects to see tumbleweeds spiraling through the frame). The recent comedy-drama Kitchen Stories, in which a team of researchers studies the kitchen habits of single Norwegian men, also may have been an influence.

Eschewing fancy moves, Schorr and his director of photography, Axel Schneppat, pretty much just stick the camera on a tripod, point, and shoot.

Given the long, steady, intentionally stolid style and the limited presence of dialogue, viewers can be forgiven for initially mistaking Schultze for a documentary. The slow rhythms and even slower pace are very deliberately calibrated -- and the approach doesn't change all that radically when the intrepid traveler reaches American shores. Schultze runs into a quirky cross section of characters, each of whom he takes in stride -- and each of whom is incredibly friendly and trusting.

The obvious result of all this is that Schultze seems overlong and rather dull, lacking the charm and inventiveness of Kaurismäki's wonderfully appealing The Man Without a Past. But for those who look back on their lives and lament that they never did take that fork in the road, Schultze suggests that it's never too late. And that might be very liberating.