With Papercuts. Thursday, March 27, at the Grog Shop, Cleveland Heights. 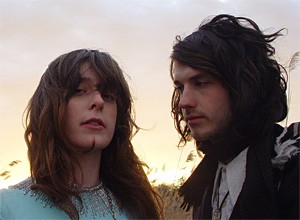 There's party music, and then there's music for the uninvited. Beach House's sad, dreamy ballads fall into the latter category. Hailing from Baltimore, the duo of Alex Scally (guitar and keyboards) and Victoria Legrand (vocals and keyboards) looks and sounds like castaways from the set of There Will Be Blood. The group's slow-motion melodies have a timelessness and Big Sky expanse that haven't been heard since the mid-'90s heyday of Mazzy Star. In fact, Beach House defies previously held logic by actually sounding a good degree more haunting than those brooders ever did. Scally's weepy slide guitar certainly plays a role. But the extra wrinkle comes courtesy of some spookily sweet dueling organs, which perfectly wrap around Legrand's dreary but confident beltings. Beach House takes on a somewhat more dramatic sound on its second album, Devotion. But it's still not party music — unless you're going to a séance at Doors organist Ray Manzarek's house, since dance moves are pretty much limited to a lonely sway or the occasional ghostly waltz.