Affleck bros. come through with a sophisticated Boston crime drama. 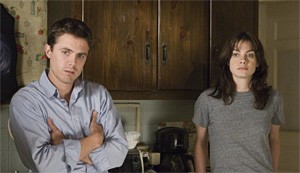 In 1950's The Simple Art of Murder, Raymond Chandler describes the hard-boiled detective as "a man of honor, by instinct, by inevitability, without thought of it, and certainly without saying it." He may as well have been summoning Patrick Kenzie, the dark-city crusader of Ben Affleck's Gone Baby Gone.

From the moment Kenzie, played by Ben's little brother Casey, promises a hard-living skank named Helene McCready that he'll find her missing daughter, we know he's going to make good on it or die trying. That's what the heroic shamus does in detective fiction: He honors the code.

But the great strength of Gone Baby Gone, based on a Dennis Lehane novel, is its ruthless undermining of the certainties of that code. In his downbeat directorial debut, Affleck has created something of a blue-moon rarity: an American movie of genuine moral complexity.

Aided by girlfriend Angie Gennaro (Michelle Monaghan), Kenzie goes trawling for the little girl through an underworld of roughneck bars and drug hideouts, earning the skeptical regard of a transplanted Cajun cop (Ed Harris) and the wary stink-eye of a police chief (Morgan Freeman), whose interest in the case is as personal as it gets. Scared of sliding down a shit trail with nothing but slime and sorrow at the bottom, Angie fears the worst. Kenzie can't let it go. He's made his promise.

It's not giving away much to say that the central crime peters out halfway through the movie. But Kenzie continues his investigation and uncovers a conspiracy of other would-be saviors doing seriously ugly things for all the right reasons. They have a code too. In a grimly ironic reversal of the detective's role as restorer of moral order, the harder Kenzie pokes around, the murkier and more damning his choices get — even the seemingly obvious one of whether to protect the innocent.

As director, Affleck relishes the close-quarters volatility of Lehane's Balkanized Boston, split along lines of class, loyalty, address, and ethnicity. The novelist's specialty is the neighborhood noir, in which the (usually sordid) history of a place shadows his characters like the whip hand of doom.

The movie version of his Mystic River lacked grimy location detail. Gone Baby Gone, by contrast, creates a more turbulent, textured sense of the city as a character. The setting is more persuasive than the plot, which recalls Chandler's gripe that good detective fiction falls prey to the same contrivances as bad. It hinges upon improbable slip-ups and a naïveté that's unlikely even for the desperate. Indeed, the movie's most generic scenes are all crime-drama standard-issue, although Affleck does invest a familiar ambush scenario with the nerve-rattling use of limited perspective and convincing confusion.

Where Affleck proves unfailing, though, is in the superbly scaled performances that he elicits from his cast. That starts with brother Casey, a major talent coming into his own, whose strangled voice and stifled calm make Kenzie a compellingly fallible guardian angel. And it goes double for the brilliant Amy Ryan, who embodies Helene as a heedless, pathetic creature of need. From Amy Madigan's too-brief role as the girl's panicky aunt to Southie rapper Slaine as Kenzie's gun-dealing pal, the finely shaded ensemble work is matched by the writing, which includes a child's no-frills funeral where the casket "had to be returned by the end of the afternoon."

Typically, we want detective fiction to present itself as a solvable puzzle. Gone Baby Gone instead saves its bleakest ethical quandary for last. Faced with two wrenching choices, Kenzie must weigh his own sense of right against what may be a greater good. But either way, justice will be shafted and lives ruined. The backbone of the detective's code — the restoration of order — has rarely seemed so hollow. That's the scorched earth the detective walks. "It is not a very fragrant world," Raymond Chandler wrote, "but it is the world you live in."