Josh Quincey bears arms -- and kids love him for it. 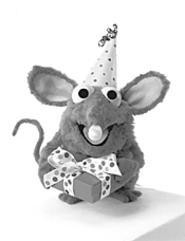 As the joys shared by proud parents go, having your son portray a little-girl bear doesn't top most lists. But then there is Josh Quincey, the puppeteer who brings life to Ojo, a star of the nationally touring show Bear in the Big Blue House Live: Surprise Party. Mom, in fact, is pretty thrilled. "She's ecstatic," says 24-year-old Quincey, whose mother is also a puppeteer. "She was all excited when I got the role."

Bear is the Disney Channel's hit show about a seven-foot member of the Ursidae and his furry friends, which include a pair of purple otters and a tree-loving lemur. In this live production, the gang -- including four human pals -- assembles a secret birthday shindig for Tutter, the mouse. It's everyone's job to keep the inquisitive Tutter from finding out that he's the guest of honor.

You won't see or hear Quincey during the show: He and the 10 other puppeteers wear black and move arm-and-leg rods through trapdoors, which are strategically concealed beneath the stage and behind curtains (the dialogue you hear is prerecorded by TV cast members). "We have specific hiding spots, so you'll never see us," says Quincey.

Mom introduced puppeteering to her son when he was seven years old. "It wasn't a life-choice type of thing," he admits. "It was, Oh! I have a puppet, and I'm going to play with it." But since then, he's made a career of it: He studied Shakespearean theater in college, where, to fulfill an improvisation requirement, he worked with marionettes. Now two years out of school, he's palling around with puppets again. "[Ojo's] very imaginative," he says. "She's very creative, whereas the other characters don't accent those characteristics."

She's also a burden to her puppetmaster. Stretching the length of his right arm -- from fingertips to shoulder -- the Ojo puppet gives Quincey quite a workout. It's so demanding, actually, that in the middle of the 90-minute show, an understudy takes over for a few minutes. "Because my arm is up for so long and my choreography is so heavy, we have to trade off to give my arm a break," he explains. And on some days (including Saturday at the Palace Theatre), the cast performs three back-to-back shows. "By the end of that third show, all [of us] have ice on [our] shoulders," Quincey says. "It is pretty strenuous."

At those moments when he's on the brink of breaking down, Quincey, like all great showmen, focuses on the kiddies, who get totally wrapped up in the imaginary world of live theater. "When you're watching Sesame Street, and you see Elmo talking to a table, you believe it," he says. "But when you see a live person onstage talking to a table, you think he's crazy. I dig that fact."