To the Five Boroughs (Capitol) 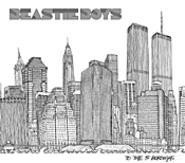 The Beastie Boys' first three albums each redefined pop music, and Ad Rock, Mike D, and MCA haven't known what to do since. Ill Communication simply copied the sarcastic, live hip-hop of Check Your Head and wound up perfectly in sync with the Lollapalooza zeitgeist, but the electronic experimentation of 1998's Hello Nasty was a failed attempt to get ahead of the times. So on To the Five Boroughs, the Beasties' retreat to the three-MCs-and-one-DJ goofiness of their beginning.

Yet like most trips back to the future, it's not that easy: Nearing 40 and with political consciences to salve, their unimaginative Bush-bashing on "Time to Build" and "That's It That's All" makes them sound less like yesterday's fiery young men than today's bitter old ones.

But the Beasties' familiar three-way, Noo Yawk whine remains as distinctive as any in music, and it's good to have it back. After more than a decade of looking outward, to Los Angeles, Tibet, and beyond, they've turned their focus back on the Big Apple, and its no-nonsense heartbeat pumps life throughout this album, from the spare, Rick Rubinesque brashness of "Hey Fuck You" and "Shazam!" to "An Open Letter to NYC," a moving tribute to the city that notes, "Two towers down/But you're still in the game." Somehow, so are the Beasties.