Band Comes To Youngstown To Fight For The Right To Vote 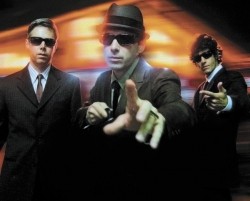 "I'm Mike D and I get respect / Your cash and your jewelry is what I expect," rapped the skinny Jewish kid who had turned his given name, Michael Diamond, into a hip-hop-friendly moniker compatible with his pals MCA (Adam Yauch) and Ad-Rock (Adam Horovitz) in the trio of the "three bad brothers" known as the Beastie Boys. It was more than 20 years ago when Mike D laid down that rhyme on "Paul Revere," and back then he commanded respect because he had fought for his right to party and then some (it's rumored he was expelled from college for throwing a keg off the ninth floor of a dorm, or so his Wikipedia entry would have it). But at a certain point, Diamond, now married with kids, commanded respect for another reason, as the Beasties went from partying to politicking.

"It's part of growing up," says Diamond, calling from a New York studio. "You grow up and have kids, and certain things that weren't important become extremely important. One of the gifts that we've gotten, in terms of having our livelihood, is that we get to travel the world and see all these amazing places. It opens your eyes to how the world sees you and your country. We are Americans, and we love being Americans, and we love our country. We need to get out there and make sure people are part of this process and not sit this one out."

To that extent, the Beastie Boys have embarked on a tour they've dubbed "Get Out and Vote 08." The six-city tour (which includes a stop in Youngstown) finds the Beasties paired with singer-songwriters Norah Jones, Ben Harper and Sheryl Crow as they visit swing states and encourage fans to hit the polls in a couple of weeks.

"Like a lot of other people, we realized within our lifetime, it seems like the most important election we're faced with," says Diamond. "We have two wars going on and a huge economic crisis. People are losing jobs and struggling to pay for their homes. Social Security is on the brink of being gone. Health care is something that's really important to people. There are so many issues. Coming out of two subsequent elections where the decision was decided upon by such a small number of voters, essentially, in just a couple of states, this is just to impress upon people that if there was ever an example of how every vote counts in this election, it's now. There's no way you can say not voting isn't going to not have a great effect."

But given that the last two presidential elections (and many elections in between) have been marred by allegations of fraud, it's got to be extra difficult getting people to the polls. Or at least getting them to think that voting makes a difference.

"I think we all know people who are cynical and don't think their vote will count," says Diamond. "I think it's all the more reason to hit it, and hit it hard, and turn out in record numbers. We see what happens when we leave it to chance. We're all way too aware of the allegations and potential of things that have gone on. One of the positive things they did this year was making people aware about early voting. You saw a party that will remain nameless trying to block early voting. Why block early voting? It's a way of making voting available to people who might not be able to get to the polls. If you do have those fears about your vote being counted [by] absentee voting, it's a better way to know you're in there. You know you're in there."

It's not hard to guess that Diamond is a Barack Obama supporter. But he doesn't just like the man because he's able to reference Jay-Z and "brush his shoulders off" when responding to the kind of criticism a guy running for office can get. He likes him because he has the kind of fire that the Democrats of old possessed.

"In a lot of ways, it's the first time in my lifetime that the candidate has resonated with me, for lack of a better word," says Diamond. "He really represents the hope and promise that was put out there going back to Robert Kennedy and the Civil Rights era. That shouldn't be underestimated. He's appealing to a whole younger generation and franchising them into politics, and it makes people feel like they don't have to have grown up royalty or have a military background. He's a self-motivated and achieving entity.

That's needed more than ever, where there's a huge disparity between wealth and poverty. To me, one of the things that's so frustrating and tragic about how people perceive foreign policy is that they don't get the opportunity to see how the rest of the world perceives us. They don't get to see the world's perception of us, and that would affect the outcome of this election for sure."

Traveling to foreign lands is partly what got the Beasties behind the cause of Tibet, the tiny country that's taken years of abuse from neighboring China and had little humanitarian support to show for it. In the mid-'90s, the Beasties staged several concerts to support the country's independence movement and brought Tibetan monks on tour with them as part of 1994's Lollapalooza.

"Adam Yauch was traveling through Nepal and met some Tibetans in exile and became aware of their situation," says Diamond, "That, coupled with the principles that drive the Tibetan independent movement of non-violence, inspired him. It was a great example of something that could translate to political actions in other areas."

As much as the Beasties want to be part of people's reasons to get out and vote next month, Diamond says they're not as concerned about another vote: whether or not the group gets inducted into the Rock and Roll Hall of Fame. The Beasties were nominated last year but not inducted; this year, they didn't even get a nomination.

As if to prove that all of their politicking isn't just an attempt to increase their stature and legitimacy, the Beasties think they're better off not getting the Rock Hall nod.

"We didn't realize we were nominated at first, and then we thought it was kind of funny," says Diamond. "Then, when we didn't get in, we thought, 'This is for the best.' No disrespect, but I think we like being against all that. When you get down to it, we're a hardcore band and a hip-hop band, and we don't need to be part of all that."