Chef Beau Schmidt is long on talent, though his new restaurant has its shortcomings. 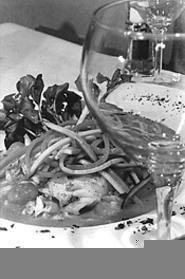 Even before his winter move from the Merriman Valley to the business district in Fairlawn, chef-restaurateur Beau Schmidt was known for his large culinary repertoire. "In the valley location, his regular menu was fairly conservative -- items like Veal Scaloppine and Chicken Marsala," confides a longtime fan. "But then he had this huge daily list of specials, with dishes like seared ahi tuna and Asian noodle cakes. That was where the really sexy stuff was happening."

The recent change in venue (to space previously occupied by Grappa's) has given Schmidt a larger kitchen in which to spread his wings and has provided visitors to the new Beau's Grille with a large, well-lit parking lot. It also gave the chef an opportunity to consolidate his menu, incorporating the specials into the day-to-day listings. But even with 30 different entrées on the new menu (not to mention 18 appetizers, 8 salads, and 14 side dishes), the chef is still putting out addenda: A weeknight list had three appetizer specials, ranging from spicy Buffalo wings to a seafood crêpe, and a Saturday night listing had five.

All of which would be extraordinarily impressive -- if only everything were done just right. But while the chef and his staff often hit the mark, there are enough shortcomings at Beau's Grille to leave a diner feeling vaguely unsatisfied.

This is not to say the kitchen doesn't show some muscle. Except for an overdone beef filet and its accompanying overdone lobster tail tempura (which we suspect may have been lingering in the kitchen for more than a few minutes, and which was willingly replaced), Schmidt and his staff do a fine job handling meat and seafood. A gorgeous long-boned veal chop was done to a succulent medium-rare. Peppercorn-Crusted Muscovy Duck Breast, given an inspired sprinkle of earthy, melting goat cheese, was like ruby-red velvet. Grilled Sea Bass, with a crown of julienned vegetables, threatened to evaporate beneath a stern glance. And sliced pork tenderloin, with a fruity mango barbecue sauce and mashed potato croquettes piqued with smoked Gouda and bacon, was richly rare and flavorful.

The ample, moderately priced entrées (most under $24) come with a house salad of ephemeral baby greens, buttery croutons, and shredded carrot, tossed with just the right amount of housemade dressing (both the mellow white French and the slightly sweet raspberry vinaigrette are beautifully balanced choices). But the larger à la carte salads are also worth a splurge, at least if our Baby Bibb and Frisée Salad was typical: Generously strewn with scrumptious caramelized pecan halves, raspberries, blueberries, bits of poached pear, and Maytag blue cheese, then stroked with a delicate citrus vinaigrette, the combo won over even a tough-guy dining companion who generally takes his lettuce neat.

But presentation is an area where the kitchen sometimes drops the ball. A fresh, fruity Lobster Napoleon appetizer, a handsome stackup of lobster meat, mango salsa, a dab of guacamole, and perky baby greens, interspersed with frangible rectangles of deep-fried wonton wrappers, was tantalizingly delicious. But the decision to present it on a bed of coarsely chopped iceberg lettuce knocked some points off its light, sophisticated appeal. Similarly, lengths of meaty, homemade chicken sausage, in a pale sauce of sour cream and whole-grain mustard, were very tasty, but, all alone on a large white platter, with just a woody branch of greens for garnish, the dish's appearance was anything but seductive.

Even when the presentation was sharply focused, flaws in preparation sometimes stole the kitchen's thunder. Slices of magnificently rare ahi tuna, fanned on a plate beside a green tangle of wakame, topped with a knot of pearly fried rice noodles, and sauced with a dark soy reduction, were a treat for the eye as well as the palate. But three slabs of tempura-battered sweet potato -- the final element in this culinary composition -- were undercooked and hard. And while our muscovy duck breast was a delight, the accompanying roasted Yukon gold potatoes were dry and mealy, as if they had been held in a warming oven far too long.

The menu description of another appetizer, Cherrywood-Smoked Salmon, beguiled us with phrases like "jalapeño griddlecake" and "mascarpone-dill cream." But again, not everything was as it should have been. While the salmon itself turned out to be astonishingly lush, the jalapeño griddlecake was a dry, disappointing little powder puff with no discernible kick. And the mascarpone-dill sauce tasted like nothing more exciting than cream.

Despite such letdowns, we had no complaints with the well-chosen wine list, a sizable selection of mostly domestic wines, with many fine bottles offered at fair prices. We eventually settled on a young, fruity 1999 Liberty School Cabernet Sauvignon ($24.95), a worthy and reasonably priced accompaniment to our pork, beef, and duck, and a wine that should only improve with age.

If the intelligently assembled wine list invites indulgences, however, dessert might be the right spot to rein in the calories. Offerings, some made in-house and others from commercial sources, ranged from a bland version of Poire Hélène (two halves of a poached pear in a wine glass, topped with what seemed like vanilla soft-serve and chocolate sauce) to a forgettable multilayered chocolate cake and a pretty good light-and-dark mousse cake, with a buttery ganache frosting and a thick curl of white chocolate as garnish.

Shortcomings in service and ambiance also took their toll on our experience at Beau's. No matter how good the food, 45 minutes is too long to wait for a first course to arrive. But that was the downtime between our order and our first taste of food on a busy Thursday night. And even then, it was another hour before our entrées showed up. We fished around to get our waiter to explain the delay -- Was the kitchen backed up? Had a cook called off ill? -- but never got so much as an acknowledgment from him of the painfully slow pacing. The same problem showed up again, although not as egregiously, on the following Saturday night.

And minor as it may seem, we also had issues with the table coverings -- thin white paper sheets set directly onto the solid tabletops -- that became wet, stained, and torn during the course of the meal. If actual tablecloths are too much trouble, we thought, bare tabletops would have been preferable to the slowly dissolving paper. Throw in the fact that dirty dishes often lingered between courses, soiled flatware was removed but not always replaced, and water refills were hard to come by, and it's no wonder that the general ambiance suffered.

Clearly, Beau's kitchen isn't lacking in sheer energy, talent, or creativity. Its huge repertoire, international flavor lexicon, and often-precise preparations point to loads of ability. That's exactly what makes the less-than-perfect food and service here so frustrating. While we arrived expecting to find a restaurant determined to do its best, Beau's Grille left us with the image of a place that simply tries to do too much.