May 10, 2006
comment
Fateless Munich The Poseidon Adventure The Towering Inferno Wine for Dummies 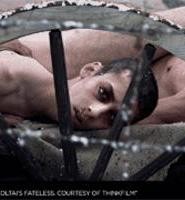 Fateless (THINKFilm)
I've no patience for the Holocaust docudrama -- didn't even see Schindler's List till years after its 1993 release, to my parents' everlasting shame. And so it was I avoided Lajos Koltai's acclaimed adaptation of Imre Kertész' Nobel Prize-winning autobiographic novel; are we not already gorged on the grim concentration-camp movies that fall off the assembly line with alarming regularity? Yet Fateless is too quietly powerful and strangely beautiful to be dismissed as one more we-must-never-forget mourner's kaddish. It's the nightmare (that of a 14-year-old Jewish boy, played by the always-withering Marcell Nagy) that's shot and recounted like a dream; it sings, much like the writer himself in the making-of doc included here. And it could even be mistaken for an adventure yarn -- an old man telling a child's tale of survival without a teardrop of sentimentality, lest he make himself a victim all these years later. -- Robert Wilonsky

Munich (Universal)
There may be no subject as volatile as the Israeli/Palestinian conflict. So even attempting to make a mainstream movie about the terrorist attacks at the 1972 Olympics and the vengeful assassinations that followed guarantees controversy. Until the final scenes, Steven Spielberg's film is a masterful study of moral grayness and the consequences of violence. So of course, it pissed off huge numbers of people. Too bad that the only special feature on this DVD (there's also a two-disc version) is an introduction in which Spielberg mealy-mouths his intentions defensively. As Munich ably proves, partisan minds are immune to shades of gray. That it pissed these people off proves that it's good. -- Jordan Harper

The Poseidon Adventure: Special Edition
The Towering Inferno: Special Edition (Fox)
There's no denying the giddy, addictive qualities of Irwin Allen's double dose of disaster. The Poseidon Adventure plays even now like a Titanic parody; any movie with a waterlogged Ernie Borgnine and Shelley Winters gets a heaven-sent giggle, no matter the promise of "hell, upside down." But it served only as a warm-up for the superior Towering Inferno, so big it required two studios and two superstars (Paul Newman and Steve McQueen) -- and it had water and fire, not to mention William Holden and Faye Dunaway, wrestling off-screen two years before they did it on-screen in Network. The countless making-of docs are equally entertaining; just when is somebody shooting the Irwin Allen story, anyway? -- Wilonsky

Wine for Dummies (Razor & Tie)
Having drained the well of human knowledge in print form (Feng Shui Your Workplace for Dummies?!), the fine folks behind the Dummies books have begun issuing a DVD series. Wine, with its complex varieties, obscure terminology, and arcane rituals, is a perfect candidate for Dummies treatment, but not in DVD form. It's one thing to read simple, clear text; it's another to be spoken to as if you're a moron. While there is some basic information on grape varieties and fermentation, the emphasis seems to be on impersonating a wine expert instead of becoming one. After all, as the show makes pains to repeat often, the only real way to judge a wine is whether or not you enjoy drinking it. What dummy needs a DVD for that? -- Harper