Is Wilco the best rock band in America? You bet. 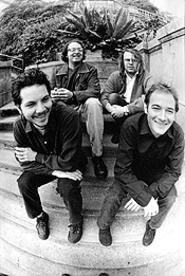 Jeff Tweedy sounds like death in full, bone-clinking sprint. Keeping to his Midwestern sensibility, he doesn't complain about it. Only when asked — and one can imagine the mucus in his nasal passages plowing through steel wool — does Tweedy, by phone from San Antonio, admit to having a sniffle. It was pretty tough yesterday, he says, when he and his band Wilco taped an episode of Austin City Limits after opening for R.E.M. the night before. Now what's up with this crummy Bic lighter?

In plain terms, Jeff Tweedy is a guy who grew up in southern Illinois, formed a band whose influence was so profound a music magazine borrowed one of its album titles (No Depression) for a name, formed an even greater band, fathered a son, made more beautiful records, and has a headful of snot.

In more subjective terms, he is, if not the best, then the most generous rock songwriter of the decade.

Wilco released its third album, Summer Teeth, in March. It's a remarkable record on many levels, not the least of which is the way it seems to abandon a small but vital genre that two of Tweedy's bands — Uncle Tupelo and then Wilco — all but defined by its present definition. Underneath the radar of the grunge revolution, musicians started making records that cobbled together country, roots rock, '60s pop, and punk. Labels stick, and "alternative country" was as good as any.

Tweedy says that Wilco didn't intend to turn its back on alt-country when it made Summer Teeth, but it's there. If the album can be summed up in one song, it's "A Shot in the Arm," which features piano, strings, synthesizer as God might have imagined it, a rich bass line, and the intoxicating lyric "We fell in love/In the key of C."

"I think we just really wanted to hear a pop record," Tweedy says. "We wanted to hear things that were exciting to us, and I guess the country-influenced stuff wasn't as exciting for us to do in the studio. We still play a fair amount of country stuff or old-type stuff in our show; it was just an effort to make a different record."

Wilco was formed when the other principal figure of Uncle Tupelo, Jay Farrar, left to start his own band, Son Volt. A sort of cola war ensued, as Tweedy soldiered on with Tupelo drummer Ken Coomer and bassist John Stirratt, calling themselves Wilco. Most Tupelo fans followed Farrar.

The smaller Tweedy contingent, however, won out in the end. With Son Volt, Farrar has emphasized the lachrymose over innovation. Tweedy just made great records, including the first Wilco disc, A.M., which features a breakup lyric as mighty as "I got a lot of your records/In a separate stack/Some things I might like to hear/But I guess I'll give them back."

Wilco's next record, the double album Being There, was inevitably referred to as "sprawling." Being There featured the best moments of '90s alternative rock, a nod to country innovators and outlaws, and a sprinkling of the early-'70s Stones. "We just kept recording and recording, and halfway through we joked about making a double album," Tweedy says. "In the end, we tried to cut all the stuff down to a single record, and it just wasn't as good. It felt lifeless. It felt like we were missing a lot of stuff. Every song kind of had its own little spot. We just were more excited about putting everything together that we had recorded. We had done it really fast and half-assed in some ways. That was kind of the charm of it; it felt like [us] clearing our minds."

Wasn't the record label sickened to see a double album? "For a while," Tweedy says, "and then they didn't care at all when we told them we'd cut our royalties."

Though he's the singer and primary songwriter, Tweedy speaks in the collective "we" when discussing Wilco, which means he's respectful of the musical process and a heckuva good guy. Being There and Summer Teeth both bear the credit "Written, produced, and performed by Wilco." Again, it's a Midwestern thing. "I don't have anything against producers," Tweedy says of the band's self-sufficiency. "I think, for some songs, it might be helpful to have an objective ear. We kind of depend on working with engineers we really like to do that. I don't really feel like paying a producer. In the end, they're the ones who are supposed to care more than you do about how it all sounds and comes together, and I can't think of anybody who could care more than us."

Not relying on a producer allows the band to record on its own terms. Summer Teeth was recorded at various studios, and the process took a year and a half. Most alternative bands wouldn't admit to spending so much time on an album, lest they appear unspontaneous, but Wilco has recognized the magic that can be created with a little effort and enthusiasm. Having a keyboard, synth, and miscellany whiz like Jay Bennett in the band (he joined after the recording of A.M.) doesn't hurt either. "The progression from Uncle Tupelo to now, I think we learned our basic recording skills were really more rooted in getting a performance than not using the studio, other than to document something," Tweedy says. "I think that probably helped us when we decided to start experimenting, because we still had a performance-based mentality. Once you get that performance, you can start layering other performances on top of it.

"I think it was good to realize that you should start with something that sounds like a song. I don't know if that's really that normal these days with recording. I think a lot of people start with drums or whatever they start with — I don't really know for sure — but it doesn't seem to me like people start with an inspired performance, whether it's just an acoustic guitar and vocal or just a couple of instruments that sound great by [themselves]. It seems to me like a lot of people block it out by bars and measures and beats, and make sure it's all in time and perfect, and then they sing."

Tweedy is less comfortable talking about his lyrics. A line from "A Shot in the Arm" — "The ashtray says/You were up all night" — suggests discomfort in long-term relationships, but Tweedy is loath to offer a shorthand analysis: "I think I went out on a limb enough just singing some of those lyrics; I don't really feel that I have to explain them," he says. "I hear it now. I kind of think about the complex nature of having relationships, and how much more complex it gets when the individuals involved don't really know themselves that well."

Tweedy had the words literally handed to him when Wilco and Billy Bragg set unearthed Woody Guthrie lyrics to new music. The result, Mermaid Avenue, appeared on scores of critics' best-of-1998 lists. Did Tweedy almost have to forget whose lyrics they were in order to function? "I did forget whose lyrics they were — I thought I wrote them," he jokes. "No, once we came up with a song or a melody that matched them, I felt really good about it. I felt really invigorated. It was easy; it wasn't daunting at all, surprisingly. If I thought about it all, the only thing I think I told myself early on was that, if people would be pissed off about this, that would probably make Woody happier than anything. We had his daughter's blessing to do whatever we wanted, and that's enough for me."

They've got our blessing, too.