Cleveland loves its beer. As long as it's not the good stuff. 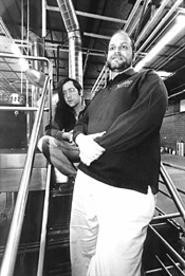 If Andrew Craze had to choose, he would probably say it was the guy in Buffalo. That's who made him realize how good he had it.

It was 1998, and Craze, who founded the Western Reserve Brewing Company with partner Gavin Smith three years earlier, was in the City of Good Neighbors to judge a home-brewing competition.

After giving a speech one night about the business of beer, Craze was approached by a conference attendee. "You have the greatest job in the world," the man said, repeating a sentiment Craze heard often. "The only thing I can think of that could even compare would probably be . . ."

The man paused to think about it.

In spirit if not specifics, few beer lovers would disagree. Since the time of Western Reserve's unlikely conception, Craze had gone from toiling in the bowels of geekdom to living Homer Simpson's fantasy life. He and Smith, friends since high school, were roommates in the early '90s, when they began home brewing as a hobby. By 1998, their products were on grocery store shelves across Northeast Ohio.

Four years later, the brewing business looks far less benevolent. In late November, Western Reserve filed for Chapter 7 bankruptcy. On a recent visit to the company's brewery off East 40th Street in Midtown, Craze couldn't even get in. The court trustee had changed the locks.

It is not the way beer fantasies are supposed to end -- standing in the cold with your brewery in hock. Then again, the arc of Western Reserve has been a blaring reminder of the fickleness of business. Its products were acclaimed. Its sales were increasing. It mattered not a whit. In a place known for its love of libation, it turns out there's only so much room for really good beer.

The birth of the American beer snob can be traced to one innovation: the washing machine. In the mid-'60s, a fellow named Fritz Maytag discovered that San Francisco's Anchor Brewing Company was going out of business. Maytag, familiar with Anchor beer from his days as a student, wanted to save the company. The cash came from selling shares in the family business, a little operation in Iowa that manufactured household appliances -- the Maytag Corporation.

Instead of trying to be the next Budweiser, Maytag was content to brew relatively small batches of unpasteurized, high-quality beer -- the way small European breweries did. Anchor Steam Beer was reborn. So was microbrewing.

Western Reserve's beginnings weren't quite so auspicious. In the early '90s, Craze was living in Seattle and working as a programmer for Microsoft when he joined a home-brewing club. Smith moved to Seattle, and the two friends began brewing beer together and dreaming little dreams. "We had talked theoretically for a while," says Smith. "Wouldn't it be great to run our own business? It was always 'Sounds like a great idea. Have another beer.'"

It's a conversation that takes place among thousands of friends a thousand times a day, but Craze and Smith couldn't shake the thought, even after their buzz wore off. The only problem was geography. By the early '90s, the Pacific Northwest had become the mecca of microbrewing. Beer was the region's chief export behind grunge bands and flannel fashion. Starting a new brewery would be near-impossible.

Cleveland was another matter. Craze had grown up on the East Side. Smith was already planning to move back to get married. Even more important, the city had been slow to the microbrew movement. Cleveland's first craft brewery and brewpub, the Great Lakes Brewing Company, wasn't started until 1988.

"We got into home brewing together, and we thought, 'Jeez, we could go home and do this,'" says Smith. "At that time, there was really only one small brewery in the Greater Cleveland area."

In 1997, the company bottled its first case. That year, Western Reserve sold 790 cases. By 2000, it was selling over 6,000. The staff doubled, then doubled again. The company began distributing to Columbus and Toledo. Yet Western Reserve couldn't get around the curve. Sales figures increased each year, but never to the point Craze and Smith envisioned. The result: "The debt started to pile up," says Craze.

Part of the problem was simple demographics. Many a microbrewer have discovered that people who tend to drink their beers share a fairly consistent profile. "Yuppies and Deadheads," says Craze. "For whatever reasons, it's yuppies and Deadheads." Cleveland, shocking as it may be to those who spend a lot of time on Coventry Road, is a hotbed of neither.

There were other problems as well. When it came to suds, Craze and Smith soon realized that Northeast Ohio has little in common with Seattle or Portland or Denver, cities where microbrews had become matters of big business and civic swagger. For every local bar, every liquor store owner who welcomed Western Reserve, there were two others who could care less about how it tasted or where it was made.

"I was surprised to find that there was a lot less support of local businesses, of local products, than I thought," says Smith. "Cleveland has a lot of pride, but it doesn't always transfer to local business."

They are not alone in this lament. "I thought, hey, we're a local product, it's a slam dunk," says Timothy Kuss, who started Akron's Blimp City Brewery four years ago. "[Bars] are going to want to have our beer. That's not always the case."

Consumption is not the problem. Men's Fitness recently reported that Cleveland has the largest number of bars per capita in the country. John Lane, a managing partner of Winking Lizard, says his chain is the nation's largest Labatt account for draft beer. But only recently has he seen a difference in customers' tastes. "It finally feels like some people are starting to catch on. People just aren't educated about beer, or they're unwilling to try different things."

Economics plays a part. Yuppie beers mean yuppie prices. While a six-pack of Bud retails for less than $5, most microbrews are north of $7. Even more damning than price is what Smith calls the one-is-enough mentality. "We heard a lot of 'Why would we want another microbrew? We already have Great Lakes,'" says Craze.

Indeed, if there is an 800-pound gorilla brewing beer in Cleveland, it is Great Lakes. Since arriving 14 years ago, the company has come to dominate the market -- expanding its reach, gaining accolades for its products, and generally providing a near-perfect example of how to run a microbrewery.

"The fact that we've won awards across the board in so many different categories of lagers and ales -- that has always been a benchmark of quality to which everybody has to look when they want to come in the marketplace," says Patrick Conway, who founded the business with his brother Dan.

But that success is also a black hole for outfits like Western Reserve, who were forced to fight for the small pool of microbrew fans willing to try something different. "I think what has happened is that people that were really the target audience of Western Reserve, those people tried a lot of different microbrews, and they found Great Lakes," says Heinen's director of wine operations Ed Tompkins, who was an early fan of Western Reserve. "The myopia of Cleveland is, we'll support our local things, but we're only going to support one local thing."

Yet Western Reserve didn't always help itself, either. Weary of getting lost in the shuffle by signing on with a large distributor, Craze and Smith decided early on to distribute themselves, which became a constant drain of time and resources. For consumers, it was sometimes easier to find a Western Reserve in Columbus than it was in Lakewood.

And though the company continued to grow, the pace was never fast enough to overtake debt it accumulated as it tried to expand. Even at the end, the strategy to increase sales would have left the company nine months from profitability. "We were a brewery, but the bottom line, in a business sense, is that we were a manufacturing operation, which means high overhead, lower profit margins," says Smith.

By early 2001, Western Reserve was running out of money. Things took a brief turn for the better last summer, when Craze and Smith hooked up with a local investor, Juan Chahda, who agreed to provide much-needed cash in exchange for control of the company. Almost immediately, however, the relationship soured, and a dispute over the arrangement is now the subject of competing lawsuits in Common Pleas Court. (Western Reserve claims Chahda bounced checks and didn't deliver payments on time; Chahda claims there were no formal due dates for payments.)

By October, Western Reserve announced it would seek bankruptcy if it couldn't locate a buyer. "There were lots of people that expressed interest, but they either didn't feel they had enough time to put it all together or they didn't have the financial wherewithal to do it," says Smith. On November 29, Western Reserve filed Chapter 7.

The closing has left the local brewing climate much the way it was when Western Reserve arrived four years ago, with one brewery. (Crooked River Brewing, which once brewed in Cleveland, now makes its beer in Frederick, Maryland.) For beer lovers, it's a situation that's as perplexing as it is disappointing.

"This city is a beer town," says Heinen's Tompkins. "It makes no sense. Ultimately, it's just sad that the city doesn't support more than one brewery. Because Great Lakes is awesome. They're the apple. Well, how about having an orange, how 'bout a pomegranate, how 'bout a grapefruit? We should have those things, too."